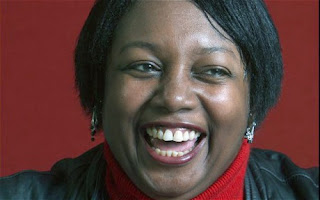 I missed seeing this woman in PERSON in Edinburgh by a HAIR two summers ago. I read a lot of Malorie Blackman in the UK, and was glad to see some of her work crossing the pond. She's been a really vocal and tireless children's lit advocate, and that's so very needed everywhere, but especially in the UK, I think, where the weight of the history of capital L "litriture" makes it hard for YA and children's lit to be taken seriously, much less with a positive frame of mind. People tend to think it's all Enid Blyton still, and "How nice that you write those little books, when are you going to write something worthy?" (Although, post JK Rowling, they're kind of re-organizing their idea of "worthy." But not by much.) Lots of cheering going, of course, as the woman herself is a funny, interesting person - and a wholesale Trekkie, which is cool, and, so far, I haven't read of anyone pearl-clutching and gasping over her being er, nominated. Well done, Britain.

Posted by tanita✿davis at 8:37 AM
Labels: Happenings, Who We Are

Yaay! That is super cool!! So excited to see this happen, for many a reason--woman of color, SFF writer, enthusiastic about reading children's lit herself...etc. etc.

I hadn't heard of her before, so thanks for the rec. I will check her out now :)

DO read her books, guys. NAUGHTS AND CROSSES is like Romeo and Juliet meets Westside Story without the singing, and add ethnicity.

This makes me so happy. Now maybe someone besides me will take Naughts and Crosses out of the library--it was one of the first books the Friends bought for the YA collection when I became president.