We don't do a lot of "cover reveals" around here - A.F. and I tend to read, review, and repeat. We've made a few exceptions for book news and the like, for specific reasons - authors whose work we've really enjoyed and feel we can support.

You remember when I reviewed a really solid, indie published book called GHOST HAND, and went on and on about it? Well, the sequel will be out come September. From the blogger PSA:

As many of you know, Ripley Patton's first novel, Ghost Hand, is also the first book in a series known as The PSS Chronicles. While Ghost Hand has been getting rave reviews on Amazon and was recently chosen as the June Book of the Month for a Goodreads Book Club with over 1300 members, Ripley has been hard at work writing the second book, Ghost Hold.

Ghost Hold is in the final stages of publication, which will ultimately be funded through the GHOST HOLD KICKSTARTER PROJECT, just as Ghost Hand was funded last year. The current Ghost Hold Kickstarter project was 41% funded in the first week, and when it reaches the halfway mark of $1250, Ripley is going to release the first chapter of the new book to all backers, with more chapters to come later as funding builds.

So, in order to celebrate, and perhaps entice you to back the project and help make Ghost Hold a reality, Ripley is revealing the cover of Ghost Hold this weekend here and all over the internet.

AND HERE IT IS! 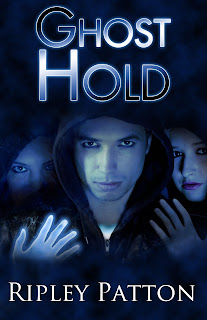 Curious to know what the book is about? Here's the blurb:

Olivia Black is back.

Only this time she's not the one in need of rescue.

Samantha James, rich, popular, and an award-winning composer at age seventeen, is the next target on the CAMFers' list. And in order to convince Samantha to come with them, Olivia and Passion must pose as cousins, blend into the most affluent high school in Indianapolis, and infiltrate a mysterious cult known as The Hold.

Olivia doesn't expect it to be easy, even with the PSS guys backing them up. But what she discovers over the course of the mission will call into question everything she ever believed about herself, her ghost hand, and especially about Marcus, the guy she is undoubtedly falling in love with.

Be sure and visit Ripley's Kickstarter Project and let her know what you think of the cover there, or here in the comments. But don't delay. The project ends July 1st and is the only way to pre-order the book before its September release.

You heard it here first, folks!

Posted by tanita✿davis at 8:30 AM
Labels: Cover Chatter, Fantasy/Sci-Fi, Happenings

Coolness!! I just went and downloaded Ghost Hand. I was intrigued by your review of it.