I still like to make "random" book selections at the library, from books whose cover I like, or whose title strikes a chord. This book was kind of that book for me, in terms of the title - evocative - and the cover - interesting - and I feel like it's borne fruit in the way those random picks sometimes do.

Reader Gut Reaction: This is a novel of political games. People who enjoy political thrillers, who read George R. R. Martin, or who enjoy chess, Stratego and Risk - these are the people who will get this book immediately. I, as quite possibly the MOST non-strategic person I've ever met (I feel sure I'll never "get" chess, and don't ASK about the Risk games of my adolescence. Painful.) struggled with this one. But, it was the kind of struggling I did when reading stuff for grad school. Not that the writing is at all that dense - it's completely user friendly. It's just that there was Plot. And How. I could not tell what was going to happen next, and it was literally a great big game - and, not being much of a strategy gamer, at first, I didn't fully understand the rules.

Concerning Character: Thirteen-year-old Bowe fully understands the rules of his world, though. Rule 1: he's going to die. Immediately, if not sooner. He's already survived certain death once. His family, the Bellangers, were once great, but as their political power waned, they saw the writing on the wall. They would not be given a place in The Refuge. Their stock had fallen, they'd lost too much money, and so, the entire family, every man, and every woman in the harems, and every child -- made a suicide pact, and ...died. En masse. Except someone forgot an infant in a crib... and, so, Bowe is saved from a house full of corpses, but it is pretty much set in stone that, as the last of his line, he'll never make it. He'll never have friends, only enemies. He'll never be able to make up for the black marks against his name - no political or monetary power, and the sole survivor of what was supposed to be a "good" end to his family name. Nearly everyone says it: though raised at Raine Mansion with the other Greens, he's practically destined to die on the first day of the Path.

The Path, to the ascorim of noble birth, is everything. Trained from childhood to understand political maneuvering, when teens are sent away to prove themselves for the fifty days before the Infernam, most boys are terrified, but determined to be worthy. After all, only escay - the underclass - are fearful and unable to understand the Path - it's because they're poor and stupid, obviously, not that they think it's a dumb, bloodthirsty way to live. The ascormin convince themselves that they are strong, since everyone knows that only the best and the brightest stay on the Path; to step from the Path is death - and many of the lower caste of the noble boys accept this automatically. Every six years, their world swings closer to the sun, in a time called the Infernam, where the surface of the world is unbearably hot - few, if any, survive. Those who are saved must retreat to The Refuge, but there is only so much room in the ocean cooled caves below Arcandis' surface. Only the noble born, the ascorim, are welcome, of course. Those invited to Refuge must prove their worthiness to survive, to be taken into the underground caverns, cooled by the sea, to last out the horrible heat, and then, emerge and take their place in society for the next sexennium.

A culture that comes from living on such a razor's width of resources is brutal and vicious, socially stratified, and constantly competing. Noble-born girls, in many ways, have it the worst: their lives consist of harems, learning to please, and competing for favor of the wealthy lords, knowing that if he takes a new wife, she will be saved - for awhile, at least. Depending upon the year of the Infernam, a girl as young as thirteen must be taken to wife - or die. The boys compete in various ways - by either becoming a favored fighter in the to-the-death ring called The Eye - or to at least earn a "noble" death there, to gain so much in business that the high lords look favorably on them, and invite them in, to scheme and lie and be ruthless enough to survive, and to play a chess-like game called Harmony so well that you give the leader's pause. Somehow, the escay have a different culture - but they are like dirt beneath the ascorim's feet. Bowe has nothing to learn from them, of course.

Six will be chosen. Only six winners, from a hundred boys. In this novel, people die, left right and center. People betray each other to go higher in the ranks on the Path, and get a better chance of being chosen as a Defender. For, yes, there is a chance for ONE of a noble boy's key helpers to join him in the sanctuary of The Refuge - everyone else? Will die. So, to some, it's worth dying for, begging for, betraying for...

Bowe is by turns terrified, unbelievably lucky, unbelievably stupid, and then, heart-breakingly brave. He loses friends he loves - people die for him, and because of him. At times, it's hard to remember he's thirteen years old, with his Spartan-like bravery, but he is one of the youngest and weakest on the Path. And, when you can't kill everyone, or have more money than they have, you'd better have a much, much faster brain. The game is survival, and the winner must gamble with all he has. 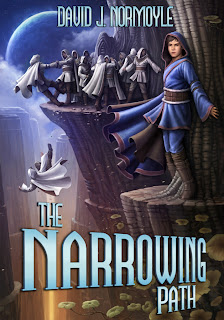 Cover Chatter: Somehow, I just LOOKED at this cover and said, "Yep, SF." There's just something about it! And, actually, this is a really good cover - the artist, Paul Davies, clearly read the book, and knew detail, down to the colors of the clothing of both Bowe and his many, many, many enemies.

Authorial Asides: The author notes, at the end of the novel, that this episode is only the beginning. This is a trilogy, with the following titles THE TREACHEROUS PATH and then, THE COLLAPSING PATH. Plot. Grisly deaths. Plots within plots, and a really bizarre society - you get thrown in on the first page, and have to make your way. Persevere! You might enjoy it.


You can find THE NARROWING PATH by David J. Normoyle online, or order it through an independent bookstore near you!

This sounds rather appealing, and I'll look out for it...

I can't help but wonder, though, if the abandoned first draft has the working title of "The Dead End Path."

My goodness! Sounds very intense! But intriguing as you say. I'll add it to the list.

Interesting! It sounds sort of Roger Zelazny/Amber-ish, the way you've described it. I had mixed feelings about those--enjoyed the setting and atmosphere and premise and such, but had very little sympathy for any of the characters.

Confession: I'm terrible at chess. I didn't learn to play until I was 12, and then I never really practiced. And I find Risk deadly dull (don't tell Rob; he LOVES Risk and used to be one of those chess-whiz kids.)