Because I'm woefully behind on reviews (and EVERYTHING) and frantically scrambling to complete a massive novel rewrite, this week I'm just going to quickly blurb two books I recently checked out from my local library. Both of them provided satisfying endings to SFF trilogies I've quite enjoyed: one by Melina Marchetta, who is one of my absolute favorite Aussie authors, and one by David Macinnis Gill, who's got quite a touch for humorous sci-fi action. Today, I present you with my most recent fantasy fix and a book that I really, really did not want to end: 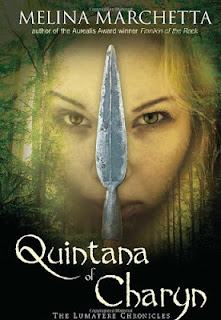 Quintana of Charyn is the final volume in Melina Marchetta's epic fantasy trilogy The Lumatere Chronicles (Book 1 reviewed here; Book 2 reviewed here), and as a conclusion to the story, it did not disappoint. Froi and Quintana, the star-crossed lovers, are the primary focus, as in Book 2; but of course, the continuation of their story, and their attempts to build a relationship and a family despite the horrors they've seen, is also the story of the shattered kingdom of Charyn trying to rebuild itself. The monarch as metaphor for the nation is not a new idea, but the way Marchetta writes it, it seems like a revelation. Perhaps it's because of her skill in writing fully fleshed-out, believable, individual characters who come to life on the page as people, not simply fantasy tropes. Whether it's Froi and Quintana, the ones around whom the effort to save Charyn revolves; or whether it's Finnikin and Isaboe, the rulers of neighboring Lumatere; or the tortured brothers Arjuro and Gargarin; or troubled Lucien of the Monts, with his Charynite wife Phaedra—it IS an epic, yet each of them is shown as a real person, something Marchetta excels at no matter how different the setting is from our own. Fans of the first two books will be extremely satisfied at this wrap-up, and if I may be allowed just a teeny-tiny spoiler, there IS a relatively happy ending. LOVED this trilogy, and my reaction to finishing was the sudden urge to read all three books over again. Do check out Liz B.'s review of this book on SLJ--it's got spoilers, but it's a much more detailed breakdown and a nicely written writeup all around.

You can find Quintana of Charyn by Melina Marchetta online, or at an independent bookstore near you!
Posted by Sarah Stevenson at 1:56 PM
Labels: Adventure, AF, Fantasy/Sci-Fi, Reviews, Romance