Well... June. Wow. In five months, we'll be knee-deep in CYBILS drama and trying to imagine how many books will be filling our nominee lists. I've been trying to read ahead of that day - as everyone who might be asked to judge does - and I've read a lot of SFF, both debut author, indie published, and mainstream favorites.

As I encounter the loads of new books for this season, I find I'm struggling with some of the main characters. I'm not talking unreliable narrators - a soupçon of red herring sometimes makes a narrative arc - but I'm finding a lot of books in which the main characters are baffling me, emotionally. I don't want to invite spoilers, but...

Reader Gut Reaction: In a word:"why?" That's my gut reaction. There were many baffling actions which didn't match with emotion that maybe should have been in place.

First, I need to say that in this novel, there is SO MUCH to love. It is set in Japan, and has that fabulous "new things per page" thing that keeps the best of adventures going. Settings, traditions, culture, and unexplained Japanese words are scattered on each page. The "unexplained" is something I particularly enjoy; however, some of the words in English didn't have the necessary context padding, and I wondered if people would be curious enough about things like "salarymen" to look it up, or if they would just shrug and let it go.

There are a lot of cultural things the main character in the novel does - she takes classes to learn proper tea ceremony. She copies out pages of kanji, which is Japanese writing, done with a brush and ink. She takes kendo, which is Japanese swordfighting. All of this is sort of included in an offhand way, and I had tiny feelings that the Japanese culture was being used as wallpaper for a novel. As you might expect, readers may have a lot of conflicting feelings about that. I know I do.

The positive is that this novel is partially set in the Shinto (Japanese ancient religion) underworld, has scary, teeth-baring demony things, live ink, and a unique setting. There's a prequel to this book already - SHADOW, and the novel itself is the first in a series. I suspect it will find its audience easily - those who love shows like BLEACH and are fans of Japan and all things manga will love it. The rest might enjoy it, with some reservations.

I always want to see novels succeed, and this series has tons of potential.

Concerning Character: All that being said, there were a few issues.

Katie Greene is an American, has just suffered a personal loss, and has understandable lapses into melancholia. She's at an immersion Japanese school, has been in Japan for eight months, and, we find out nearly immediately that she's not fitting in with the culture - she forgets about the special paper shoes she's required to wear at school, and almost wears them home. There's a lot of painful, confusing, "different-from-home" moments in nearly every breath, some of which I think might have been explored and exploited more. The cover blurb was the whole reason I wanted to review this book - margin doodles glaring at people!?? - so there's a lot of spooky and weird to go on. But, while those many details were good enough to grab my attention, some of the murky character motivation derailed it.

As before, "WHY?" was a big question I had. Mainly it circled around Katie's strangely non-self-reflective attraction for bad-boy and much older schoolmate, Yuu Tomohiro. 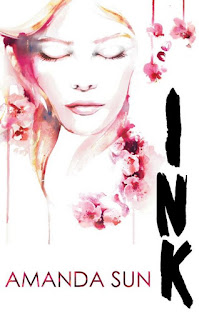 The novel clearly sets up the cultural reserve and uniqueness of Japan - students call each other by their last names, except if they are more than friends - which happens a lot more in groups of girls, rather than girls-and-guys. Underclassmen are truly lowly, and don't speak to upperclassmen except if the upperclassmen deign to acknowledge their existence. There's precedent for a clear and realistic division between genders and ages and in a way, classes. Katie is The Awful American, in many ways. She is annoyed by the myriad things she does wrong in Japanese society, is irritated that so much is required of her, and is resentful of her aunt. She wishes she could blend in and fit. And then, when she overhears Yuu in a huge breakup in the halls of the school after hours, despite saying she's not interested, despite observing truly despicable behavior from Yuu, she makes him HER BUSINESS ever after. Yuu, who sees her not-eavesdropping-but-can't-look-away-ing and gets in her face about it, is abruptly and inexplicably like catnip in a school tie. Despite claiming to be afraid of him, and his staring her down in an aggressive and challenging way, and despite his taunting her, the next moment Katie climbs a tree in a short skirt and screams at him. From then on, she's on him like glue.

Katie has myriad, chatty friends at school, friends her aunt is happy to hear about (even though it's obvious Katie fibs), but the reader is left in the dark as much as Katie's aunt. Her friends aren't really fleshed out much, we can only "see" our heroes, Katie and Yuu. I was a bit disappointed at how far into the background the friends receded - they seemed to be a device, a Greek chorus, all to tell her things in unison, and then fade away.

Meanwhile, Yuu. I remember a character just like him in BLEACH. He breathes vibes of a rather amusing bad-boyness, and frequently says, "Stay away from me. I'm not good for you." (Do I hear Edward?) That Katie immediately obsesses over, latches onto, and begins to stalk him (Bella??), the novel seems to imply, is because she sees his goodness, angst and anguish - and because he's "up to something" that she must know about. This is where the Greek chorus of her friends come in, as wide-eyed, they by turns warn her against him, or acquiesce to the idea that it's fated or whatever, and then want to hear all of the details. Don't get me wrong: this is high school, and I can totally see a desperate and ridiculous girl stalking a boy. The trouble is, Katie isn't desperate and ridiculous - at least, not all the time, and yet.... The "why?" of her stalking remains undisclosed. I kept wondering why she cared so much, and, in the end, found the overwhelmingly billowing romance to really overshadow the paranormal and really interesting aspects of the story. 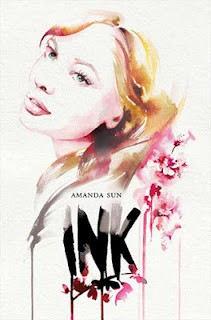 Cover Chatter: Both the ARC and the final cover of this novel are very evocative. The watercolor, dripping, reminds us of the live ink - but both the closed eyes on the ARC and languorous head-tilt on the final seem too dreamy and passive instead of determined and somewhat headstrong as Katie has been - she stalks a guy, and follows him into unsafe places, for goodness sakes! To my mind, the book designers missed a trick by not trading on the FULLY SPOOKY aspects of drawings, like, looking at you, and not including some of the architecture of Japan in the background. "Atmospheric," "quiet," and "pretty" are words I'd describe this cover, which is kind of not like the novel. The water color effect works, though - it gives a vagueness and a sort of trailing-off-into-nothingness that goes well. The cherry blossoms on the final cover also look a little less like flowers and a little more like muddied ichor, so my savage nature is soothed.

Authorial Asides: According to brief biographical snippets on the Web, Amanda Sun has lived in Japan - no idea how long or what for, but I believe that really does help the setting just live and breathe in this novel.


AFTER JUNE 25, you can find INK by Amanda Sun online, or at an independent bookstore near you!

Hmmm. I'm intrigued by this, but some of the issues you brought up make me hesitate a bit. I'm kind of intrigued by Japanese immersion school, because I like stories set in schools. Really all I know is based on films like Whisper of the Heart and The Girl Who Leapt Through Time. (I didn't read the book from which The Girl Who Leapt Through Time is based.)