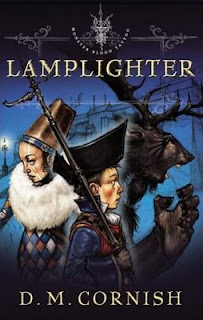 If you enjoyed Foundling, the first book in the Monster Blood Tattoo trilogy by D.M. Cornish, then you'll be happy to hear that the second book, Lamplighter, continues to deliver on the richly developed story started in volume one. Though the beginning of the book felt a little detail-heavy with respect to the setting and world-building, after a couple of chapters I was drawn in yet again to the adventures of Rossamünd Bookchild.

Rossamünd has finally settled in to his training as a prentice lamplighter at Winstermill, the main facility for the schooling of lamplighters in every aspect of their service to the Empire. Besides military-type drills and classes in theory and chemistry relating to lamplighting, there's the actual lighting of the lamps—troops of prentices accompany fully-fledged lamplighters on their rounds, lighting the lamps at evening and dousing them in the morning. That's the way it's been for ages.

But everything is starting to change, as things tend to do. Firstly, the manse at Winstermill has taken in their first female prentice: Threnody, the daughter of a noblewoman and calendar. Calendars are women who roam the country defending its citizens from monster attacks and other troubles, either by traditional firearms or by the augmented mental powers of a lazhar. Threnody happens to be a type of lazhar herself—but an untrained one whose powers are more harm than help. So she's decided to become a lighter, to the consternation of her uncompromising mother.

Another thing that's been changing is the increase in monster attacks—theroscades—along the lighted Wormway that wends its course across the lands. Rossamünd first encountered Threnody during one of these unexpected theroscades, and there are more attacks to come. And when Rossamünd and Threnody are sent by the scheming Master-of-Clerks to the furthest, most dangerous outpost of the Wormway, they realize that more is afoot than simply a random increase in monster attacks—and that life isn’t nearly as simple as they thought. "Monsters bad, humans good" just doesn't seem to apply as neatly as they were raised to believe.

As with the first book in the series, Lamplighter is filled with rich detail and a thoroughly developed world with its own mythology, social structures, and history. It might be a bit much for those looking for a fast-paced adventure, but for those who like to savor a complex, layered, and fully realized setting, this book is astonishing in its level of detail. The story doesn't disappoint, either—once it really gained momentum, I was thoroughly caught up in Rossamünd and Threnody's adventures and developing friendship. A very strong second installment in the trilogy.
Posted by Sarah Stevenson at 12:08 AM
Labels: Adventure, AF, Fantasy/Sci-Fi, Reviews

What a gorgeous cover!! And I'm DYING to read this one!! The other one ended *JUST* when things started to begin, and it made me SCREAM OUT LOUD.

I ABSOLUTELY THRILLED to get to interview this guy. Rereading just this week -- and man, again: this ROCKS.