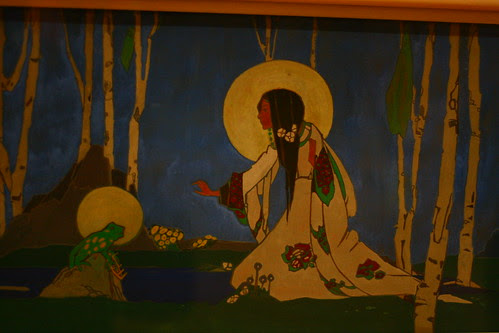 It's a bit dim and dark, but this piece of art is from the early , (ED: THANK YOU, JULES. It's from 1913 by Jessie Marion King, and a better print of it is found here in Jules' brilliant Frog Prince annotation. WOW, do I know some smart chicks!) as you may be able to tell, and portrays the fairytale meeting between the prince and the frog in The Frog Princess. Its decorative details and twenties feel combine with weirdly Native overtones, as the princess' gown and hair look like something from the Pocahontas set. (On the other hand, how can I think this is weird when Disney is setting the same story in New Orleans?) I wish the photograph had turned out better (and that I'd read the placard again and seen if there was some explanation for what looks like -- halos? Around the frog, too?!) but since the museum is only a mile from my house, I am pleased that I can go and enjoy it again in person, without or without guests.

Speaking of guests, Death March with Castles -- and museums -- is on hiatus as my guests go off for a four day jaunt into the countryside (where, I'm told, it's still snowing. Brrr!). I'm home recovering from touristy joy and frantically catching up on housekeeping chores before they return. Meanwhile, the Potter trial is going on, and Galleycat has had fun up-to-the-minute reports about the powerpoint and other details. I know previously I've cracked wise about a single book ripping away all the impact of the Potter series, but apparently the book has a lot of quotes from various Potter books in it, and they're used without permission. Hmmm. Does that change how her resistance to the book's publication strikes you?

Also hat tip to Galleycat, the Ernest J. Gaines Award for Literary Excellence is seeking nominations of full-length fiction by an African-American writers published during the 2007 calendar year. Go to the site for information on how to nominate your favorite eligible novel!

And for today's REALLY cool thing: movie technology that has become reality. From Miss Cellania's Tuesday Gadget Report -- the Terminator eyes are kind of ...real. Creepy.

I've discovered that joy peculiar to Florida, parts of the East Coast and definitely the UK -- closet mold. Back to the bleach. Sometimes I wonder how I *EVER* get anything written!!!!!!
Posted by tanita✿davis at 9:09 AM
Labels: Random Notes and Errata, Views

How very Art Nouveau that image is--reminds me of Beardsley.

I love that painting and am jealous you saw it up close. I annotated The Frog King in grad school (man, that site needs to be updated), and I included that painting on the page called "The Tale." I have a vague memory of not being 100% sure about my legal rights for using it in terms of copyright, but I pushed it and did it anyway. I love that painting.

Oh, JULES! How cool! Your print of it is way better than mine -- and when you come to Scotland (someday) I'll drag you to the museum and you can see it in person. I, too, just LOVE that picture...

I'm such a geek, I hate ending a sentence with a preposition.

I know -- and 'At which museum is it' sounds a bit overly formal!

It's at the Kelvingrove Art Gallery and Museum... in Glasgow, Scotland. It's a GORGEOUS museum and this painting is just sitting in a quiet corner of a whole section in celebration of Art Nouveau. It's lovely.

They have a whole Art Nouveau SECTION? I have GOT to go.