Instant Karma Is Going to Get You 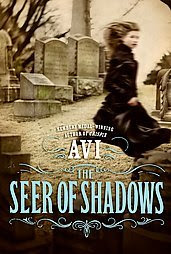 Horace Carpetine is almost fourteen, and his dream is to become a practitioner of the relatively new (in 1872, that is) science of photography. When he's apprenticed to Mr. Middleditch, he hopes to do his parents proud, but Mr. Middleditch isn't quite the reputable and upstanding society photographer that he claims to be. Still, Horace decides to make the best of it, and do his best to learn the finer points of photography.

One day, however, a strange servant girl appears at the offices of Enoch Middleditch, inquiring about a photography session that her mistress has requested. But when Horace and his employer meet with Mrs. Von Macht--in mourning for her recently deceased daughter--they sense that all is not well in the household. The servant girl, Pegg, implies as much to Horace. They soon become friends, and Horace realizes that there's far more to the Von Macht family than appears on the surface. And things REALLY start to get creepy when Horace's photographs reveal the ghostly image of Eleanora Von Macht.

I'd never read anything supernatural by the versatile Avi, but his latest book, The Seer of Shadows, shows that he's not only a master of bringing past history to life (we already knew that!), but also skilled at evoking suspense and mystery. I enjoyed the level of detail he invests in helping the reader visualize the New York of the past--not just the sights and sounds but also the very flavor of the language. This is a fast-paced and deliciously thrilling ghost story, with an underlying theme of friendship nicely woven in.
Posted by Sarah Stevenson at 6:21 PM
Labels: AF, Fantasy/Sci-Fi, Guy Appeal, Historical Fiction, Reviews

Thanks for the review. I think I will check it out. The karma thing is a little intriguing

Ooh -- I'll definitely look out for this one! I love historical fiction, and this book sounds particularly intriguing!

This was a great book I just finished reading it and now im doing a book advertisment for it and im kinda stuck but ill figure it out because the book was amazing!!!