Changing...For Better and For Worse 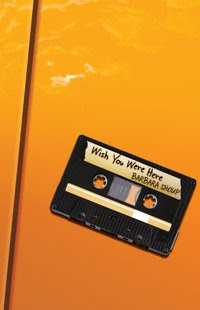 The title of Barbara Shoup's recently re-released novel Wish You Were Here is just so incredibly right on. With it printed on a tape cassette on the cover design, it brings to mind the lyrics to the Pink Floyd song of the same name: "How I wish you were here / We're just two lost souls swimming in a fish bowl year after year." And this book is about a lost soul: Jackson Watt, about to start his senior year, is still having trouble coping with the divorce of his parents--an immature father who's a roadie and stage crewman for countless classic rock bands, and a mother who's about to get remarried and throw a new stepdad and two new stepsisters into his life.

Then his best friend Brady takes off. And doesn't come back. Jax knows he's probably off trailing the Grateful Dead around the country (the book was originally released in 1994, before Jerry Garcia died), but Brady doesn't bother to get in touch with him or even his own parents. Jax is left to deal with senior year and his new stepfamily, his father's accident, a long-distance girlfriend, a clingy and troubled short-distance girlfriend, you name it--all on his own.

Brady would have told him to just forget about all the bullshit. But Brady isn't there. And Jax is starting to wonder if he really ever knew his friend at all. Wish You Were Here is a wrenching and very realistic story about a nice guy who ends up with a rather long playlist of life's problems suddenly dumped on him. Most people wouldn't cope too well, and Jax makes his share of mistakes, but ultimately this is a story of losing oneself in order to find oneself. It does not pull punches. And contrary to what it says on Amazon in terms of age recommendations (12 and up for PW; Grade 8 and up for SLJ), I'd probably say that 14 and up/Grade 9 and up is a bit more appropriate, considering the sex, drugs, and rock 'n' roll.
Posted by Sarah Stevenson at 6:37 PM
Labels: AF, Guy Appeal, Problem Novels, Realistic Fiction, Reviews