More Than Just a Spud 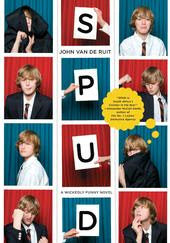 I was really excited to read John Van De Ruit's Spud--I'm not sure I've ever read any young adult fiction by a South African author. While I was reading I couldn't help comparing the overall aesthetic, the way certain topics were treated, etc., to the way those topics are handled in American or British or Australian YA lit. Most of all, I was fascinated by how the school system differs from the traditional American public school system—for this is a story about thirteen-year-old John "Spud" Milton's experiences at boarding school.

To me, it seems much like British prep school. Spud (so named by his peers because of his, erm, modestly endowed and not-fully-developed male region) is a scholarship student at a reputable school, where he goes to live with a colorful, varied, hilarious, and sometimes over-the-top cast of characters. Nearly every one of his new dorm-mates has a nickname, flattering or not—Rambo, Fatty, Earthworm, Gecko, and so forth—and everyone gets into some kind of trouble or another on a regular basis. Bossy prefects, disastrous rugby matches, infantile pranks, and neurotic roommates are de rigeur.

But this story has its serious side, too, and Spud, though he gets teased mercilessly, is also admired—by teachers for his thoughtfulness and quiet potential, by his fellow students for his friendship and his talents as a singer and actor in the school musical production, and by his first-ever girlfriend. He has to deal with an array of parental dramas, romantic traumas, joys, and griefs, and he's occasionally tripped up by his own faulty judgment—just like anyone else.

Written in diary form, Spud is funny, a little crude (would you expect less from a teenage guy?), and definitely eye-opening, and Spud himself has an endearing, clear-eyed perspective that's also still very innocent and goodhearted. I was very pleased to note that there will be a sequel to Spud's misadventures.
Posted by Sarah Stevenson at 12:06 AM
Labels: AF, Guy Appeal, Humor, Realistic Fiction, Reviews