The War at Ana's 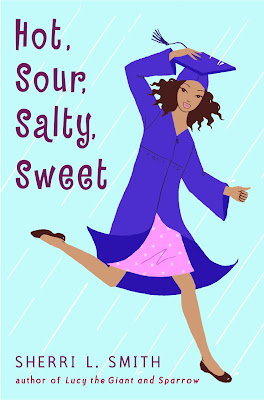 Hostilities are resuming. Which war is it? Well... pick one.

It could be a continuation of the war to be Ana Shen-White's Top Grandmother, the one between Ana's Chinese and African American grandmothers. That war's been declared all over again.

It was supposed to be Ana's 8th grade graduation dinner, to make up for missing the chance to dance with Jamie Tabata, the gorgeous Japanese boy she's had a crush on since the 2nd grade. Instead, it's definitely war -- Ana's fighting with her hair, her nerves and her outfit. Her parents are trying hard not to fight with anybody, and her guests -- even the Tabata's are fighting.

It's a war over dinner.
Dumplings are thrown. Words are said. Tears are shed.
Will there be any survivors?

This novel could have been a series of stereotypes exploited into comedy. Instead, it is a rich cultural stew, served with generous helpings of anxiety, nerves, anger and finally -- humor, which is the glue that holds families of all kinds together. The war at Ana's is, on the surface, between cuisines and cultures, but it's more than that. It's between what Ana hopes for, and what actually is. It's about reality -- and acceptance.

Hot, Sour, Salty, Sweet -- these are the various flavors that make up a good meal, and make up a "marvelously biracial, multicultural family." Love 'em or hate 'em, a good meal -- and a real family -- is made up of ALL four tastes. Don't miss this amazing book.
Posted by tanita✿davis at 6:02 AM
Labels: Multicultural Fiction, Realistic Fiction, Reviews, Romance