A Slice of Life, Malaysian Style 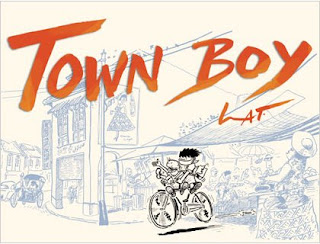 This book was a 2007 Graphic Novel Cybils Award Nominee.


Mat's family just moved from the country to town, which means change in every aspect of his life, from the blocky little house he now lives in to his classroom full of boys from a variety of ethnic backgrounds. Mat lives in the Malaysia of the 1960s--as did the author of Town Boy, the popular and prolific Malaysian cartoonist known as Lat.

It's probably safe to assume that Lat's own childhood and teenage years served as inspiration for this funny, expressive sequel to Kampung Boy. With artwork that's just a bit reminiscent of R. Crumb, Lat portrays the day-to-day adventures of Mat in an expressionistic and distinct style. From making friends in his new school, to getting to know the prettiest girl in his class, to dancing to loud American rock music, the everyday realities of Mat's life are easy to relate to.

At the same time, Lat's very individual artistic style nicely depicts the feeling of being in Malaysia--the foliage, the architecture, the atmosphere of the town as Mat bikes and runs along its streets. The reader really feels like they're getting a glimpse of what life was like growing up in the Malaysia of the '60s. Though, from time to time, the characters were drawn in a sort of caricatured style, Lat's equal-opportunity sense of humor makes it clear that he is not mocking any particular ethnic group. Rather, he's portraying a specific place and time through his own unique cartoonist's lens. This is a rather quiet, though quirky, title suffused with warmth and humor, but it's an eye-opener for anyone unfamiliar with the setting.
Posted by Sarah Stevenson at 10:47 AM
Labels: AF, Graphic Novels, Guy Appeal, Humor, Multicultural Fiction, Reviews

REALLY love this guy's work, and would love to get an interview with him someday.

Hello, I work for Fitzhenry & Whiteside Publishers in Toronto and I am compiling a list of YA blogs.

Can one of the contributors please email me at max@fitzhenry.ca so I can get some mailing information and start sending you review copies?

Thanks and I hope to hear from you soon.

I can't believe I found Lat here! I grew up in Malaysia, and Lat is one of our national treasures. He manages to combine a downhome-boy vibes with a worldliness that makes his work very appealing.

Isn't Lat great?! He travels so much it's hard to get him to sit still for an interview, but we've exchanged a couple of emails. He's a lot of fun, and his work is very fluid and funny. I love Town Boy a lot!