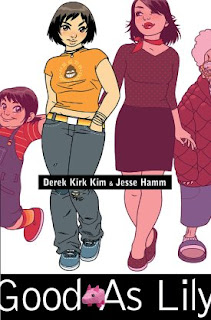 Way back in August, Little Willow slipped me a copy of Good As Lily, written by Bay Area graphic novelist Derek Kirk Kim and illustrated by Jesse Hamm. Since it's the Lunar New Year, I thought it would be nice to feature some work by Asian-American authors, and this one fit the bill quite well.

By all outside accounts, you could consider Grace Kwon to have a pretty nice life. She's got parents who love her (but also, like typical Asian-American parents, push her pretty hard), the lead in the upcoming school play, and a great group of friends.

But when those friends "kidnap" her for an 18th birthday picnic in the park, her life starts getting a little strange.

It all started with the pig pinata.

Oh, and then there were the alternate versions of Grace. And the slapstick attempts to hide Elderly Grace, Young-Woman Grace, and Toddler Grace from her unsuspecting parents. And the food fight at the bake sale. And, of course, the scheming of snobby Stephanie.

This is a funny, endearing, and quirky read. Grace--at any age--is an appealingly flawed protagonist and easy to root for. Jesse Hamm's illustrations are fun, expressive, and not overdone; they fit the story perfectly, although from time to time (albeit VERY infrequently) I felt that the depictions of Asian-American characters were just a tad exaggerated. However, that did not in any way affect my enjoyment of the story, which was a cute tale of friendship, love, and learning to appreciate one's inner worth.

I was a little sad that there wasn't very much time devoted to the idea that gave the book its title: the fact that Grace feels like she must somehow live up to the memory of her older sister, Lily, who had died at some point in the past. It seems like an important idea, but there was really only one scene that dealt with the overhanging shadow of her sister. But that being said, this was a nicely crafted story with mainstream appeal. I enjoyed that it had a touch of the fantastical, not to mention a liberal dose of humor. I'll definitely be looking for more of Kim's work.
Posted by Sarah Stevenson at 2:35 PM
Labels: AF, Girls Fiction, Graphic Novels, Magical Realism, Reviews

I agree with the last paragraph - I wanted more exploration of the sister's shadow because, as you pointed out, that was the title and her big issue.

I have to say that I really love the artwork in this -- Grace has a realistic body, which is exceedingly RARE. Chuck this one in your book exchange packet, if you would. I'd like to read it!