This is a companion novel, second in the SOME QUIET PLACE series. SOME QUIET PLACE, which was published in 2012, has a common emotional personification, but that's the only overlap; it's definitely a standalone novel.

While the cover is attractive, it has zero to do with the novel, utterly zero, and continues in the theme of Pretty Caucasian Girls In Big Dresses, which really makes no sense. As the main character tends to mope around in jeans, I'm not even sure who the girl with the dress is. Maybe a personification of Hope? Who knows.

Concerning Character: Alexandra Tate, at seventeen, has been haunted by the need for revenge ever since the death of her mother, father, and brother in a car accident. She knows the man who was responsible for running them off the road, Nate Foster, and the day he is released from his prison - early, for time served with good behavior - she is there, to sit in front of his house, stolen gun in her hand, hoping to drum up the courage to end him, like he so callously ended her family.

It's not that simple, of course. In Alex's case, it's even less simple, because for her, Revenge is not just a feeling... he's a guy. A gorgeous guy, her age, whom she really, really, really wants. He can't touch her, though -- not until she chooses him. Somehow, the irony of the fact that their relationship is contingent on her pulling the trigger on that gun and ending a life misses her entirely. She agonizes over killing this man so that she can have a few minutes of physical time with Revenge. If she could just do this one thing, it would change her whole world. Yeah, yeah, she knows he's not human, but the fact that she's living in a metaphor? Goes right over her head.

It's her inability to understand how Revenge could not be awesome which ...bewildered me. Yes, her family was dead, and Revenge, who greeted her at the table every morning, was indeed a constant -- except when she couldn't do what he wanted. Then he was... spotty. He was an inconstant friend. Alexandra's weariness, her wandering, cutting classes, obsessing -- all realistic actions of grief -- were disturbingly realistic. The novel didn't progress very quickly, and so readers are caught off-guard when a new character appears.

When Forgiveness shows up -- also an otherworldly hot guy -- things get... immediately complicated. 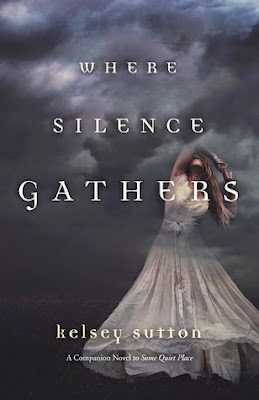 Reader Gut Reaction: I liked a lot about this novel, but there were some elements which didn't work for me. First, there's insta-lust. Forgiveness comes on-scene, and Alex really reacts to him. He's beautiful -- just beautiful -- but she doesn't know him from Adam. It's not made especially clear that something about him pulls Alex to him immediately -- and it should have been. Even in the metaphorical sense, forgiveness can seem repellent, because it represents so much of what we DON'T want, that is, giving up our grudges, but when we truly consider it, it looks like a cold drink of iced tea in a desert. It looks like rest and unknotting muscles. I wanted her to be drawn and to feel that, and wonder at it -- and to realize she was living in a metaphor. Okay, maybe that last is asking too much. I always love it when, in fractured fairytales, the character kind of breaks the fourth wall and realizes, "Oh, I have to do this, because Cinderella!" and they get it. Not this time. The author's insistence on a feel of more romance, less parable is what made this confusing for me; at times Alexandra seems, at best willfully blind, and at worst, completely idiotic.

Then, there was the love triangle, which are never my favorite things. Revenge and Forgiveness, of course, absolutely loathe each other, though Forgiveness -- or Atticus, as Alex calls him -- is a lot more cool about it. The Choices, as Alex calls them, know things about her -- about her childhood, about her memories, about the secrets that lurk in the home of her aunt and uncle. They know things -- but they're not supposed to interfere and tell her. No touching, no telling. No crossing the line. And yet, they're both calling to her, one insistently, one gently asking her what she really wants. It was here, where the author didn't stick to the metaphor that kind of bugged me. Revenge and forgiveness can know nothing I don't know -- and, eventually, Alex discovers things, based on the nudges Forgiveness gives her, and finds her way to truth. Oddly enough, truth isn't personified.

Alexandra's inability to move past life after losing her family, should have been the A Plot, but the love triangle takes over -- leaving the secondary plot, to do with missing children, kidnapping, and mad scientist experiments a little jangled and almost anticlimactic. The secondary plot seemed to be attempting to explain the how and why of anyone's ability to see Choices and Elements and everything else Alex can experience that others can't, but not enough time was spent with it to truly flesh it out -- it could have been a novel of itself.

This novel was a bit uneven, at times really slow-paced, and I was a little confusing going in, but despite my reservations I'm still intrigued to see Magical Realism and personifications being written for modern readers. This novel was wrenching, surprising, very involved, tumultuous, and a complete mind trip, but overall, an interesting read. I'll be interested to see if there's another, and where that one goes.


I received a copy of this book courtesy of the publisher. After July 8th, you can find WHERE SILENCE GATHERS by KELSEY SUTTON online, or at an independent bookstore near you!