This is necessarily going to be a short book blurb. It's hard to review a book like this one, where so much of what goes on is a secret. The author intended for the reader to be in the dark, so I'll leave you there. Just know that it's a slice-of-life summer read, with quite a few surprises. It's about what you know, what you think you know, secrets kept, and ...why.

I write family stories, so I'm always intrigued by the families and their truths that other authors create. This novel is a "you'll laugh, you'll cry, you'll reel" type of story; all of the characters, but especially the narrator get hit with one thing after the next - boom, boom, boom - and while she's ultimately resilient she's still reacting and not acting, and could have really gotten herself into trouble. I found myself surprised that after everything, they manage without the help of a therapist. I don't exactly know how I feel about that, but we'll get back to that in a moment.

Concerning Character: Forrest Shepherd has the right to expect that everything is going to stay the same. After all, for the past sixteen years, it has: her Mom's been her Mom, lovingly micromanaging the whole family and über-controlling at times, her Dad's been the sunny-side-of-the-street calm one, her brother has been gorgeous, popular, and headed for med school, and she's been a word nerd, boyfriend free, and socially a disaster. Every year, the family spends a month at Sparkle Beach, nicknamed Spackle -- and they mooch around in their musty old place, running around, surfing, and just being a family. Except this summer: things have changed. Forrest's brother, Brian, turned eighteen, and gave up his place at Vanderbilt. No more prestigious Ivy med school. Also? He started dating Olivia, one of the snottiest, most beautiful girls in the school, who, typically, is mean, rumored to be on drugs or anorexic, and who makes Forrest feel small and stupid. Then, Forrest's mother goes from control freak to Summer Hostess: she's invited Olivia to spend the month of June with the family at their beach house -- when she KNOWS Forrest can't stand Olivia, and she can't stand her either! What gives!? The house at Spackle Beach has always been Forrest's refuge, but between Olivia - puking after every meal like the anorexic she obviously is, and Mom and Dad's super-vicious arguments, and Brian snarling at Forrest if she even looks at Olivia cross-eyed -- nothing is as it was. Forrest is isolated, miserable, and something's gotta give... 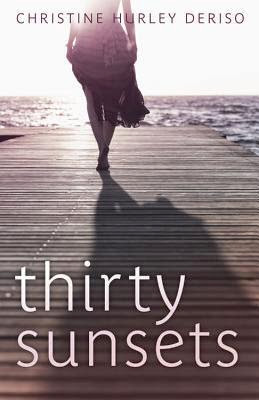 It's a good thing she met a cute guy on the beach. Scott's promised to catch all thirty sunsets with her this month, and until he came along, nobody seems to have even noticed that Forrest's even around. But, Scott notices -- and suddenly, Forrest sees everything in a new light... Suddenly, things have the potential to be good. Olivia might be... okay. All might not be lost, and it might be a fabulous summer, just like always. Or, it might be the summer that changes everything.

Reader Gut Reaction: As I've said, this novel is about Family Secrets. And, there's not just one secret the Shepherds are sitting on. There's two big ones, initially, with a third popping up in the end. There are plot twists that are unexpected -- and honestly, by the end of this summer, there would have to have been, for me, a psychologist's bill for weekly visits. Man! There's a lot that happened in this novel - and the pacing was at times breakneck. I felt like a Weeble, having been punched from all directions, and just wobbling back for more. DRA-MA, wow. And yet, for some people, that's what's going to make this novel un-put-down-able: the chance to sneak a peek into the dirty laundry of another family's life.

At the same time this novel is complicated, it is also very simple: no matter what the issues are, if you love the people to whom you're related, they'll work out -- really. That being said: love is more complex, nuanced, and ultimately harder than just a lot of Kumbaya and Good Feelings. There's a lot of unsolicited forgiveness and understanding in this novel of which I am dubious and critical -- and a lot of unanswered questions about motivation and the "spackle" the family tends to put over the cracks. How do people, who know they're spackling, accept that of each other? Or, more specifically, why didn't the members of the family who knew that secrets were being kept insist that someday, a reckoning would be a difficult thing, and let Forrest know at least one, inevitable truth?

Because the novel takes place within the span of a month, it must have been difficult for the author to find the characters enough time to truly concentrate on accepting their new circumstances and work to digest and assimilate all the new information in their lives. To my mind, some of what was shared should have started a grieving process, and should have seriously been accompanied by some family therapy sessions, even the DIY sort where you all just sit down and check in about how you're feeling! -- and even more, when near the end of the novel, Forrest is seeing something through on her mother's behalf, picking up a burden that isn't hers to bear. Despite what I feel to be seriously unresolved psychological issues, the novel ends with a feeling of reconnection, and overall, a strong family love, which means that the family will survive. If you pull for a HEA regardless of details, this one's for you.

You'll laugh, you'll cry -- and you'll be glad you didn't get invited to the beach house!


While I got my copy of this novel courtesy of the publisher, in early July 2014 you can find THIRTY SUNSETS by CHRISTINE HURLEY DERISO online, or at an independent bookstore near you!

Posted by tanita✿davis at 2:54 AM
Labels: Class and Identity in YA literature, Girls Fiction, Realistic Fiction