As an occasional lurker on Shannon Hale's blog, I'd read a bit about this novel before it came out -- a very little bit -- but was surprised when Hale revealed that her character had been differently-abled from birth. I read Mindy's review on Disability in Kidlit and was convinced to read the novel. It is entirely in the Science Fiction realm, it's for young adults, and it has a half-Paraguayan, one-handed, female protag. It also has a lot -- a lot -- of plot twists, a dicey love interest, and a lot of cartoon violence/ethical gray areas that were a little... bothersome to me as a reader, because they were left open-ended. Finally, it had a character who felt too close to the Magical Negro trope to make me very comfortable. I'll cover both of those last two items a little later.

In an attempt to avoid spoilers, there is a blank line left near the end of the review. Highlight it, and the words will show up. SPOILER ALERT.

Concerning Character: Maisie Brown can honestly say her "middle name is Danger..." because it is. Her full name is Maisie Danger Brown, and she usually thinks of it as kind of a sick joke. Her parents are scientists and a bit weird, she's been homeschooled her whole life, and she's super smart and feeling... stifled. Her whole world is her mother, father, and Luther down the street. No other kids, no other activities.

Her world enlarges exponentially when she wins entry into a space camp -- on the back of an inedible cereal. She wins an all-expenses paid trip, excitedly leaves her small live behind, and emerges into the most fascinating, wonderful thing, ever. No one gives her crap about her arm at all (which, Mindy felt, was somewhat disingenuous and not like real life - but, okay, point, this is fiction), there's plenty for her agile mind to cling to, and blammo -- she very quickly catches the attention of a boy who says to call him Wilder. He gives her quite a few "sexy Latina" pick-up lines that would have made ME make him a grease-spot on the ground, but Maisie doesn't seem to mind. Wilder is part of her "fireteam," a group of kids who score the highest on the strength, ability, flexibility and smarts testing and training the Space Campers are given. Mi-sun, an eleven-year-old Asian girl, who drinks nothing but blue slushies, a strong and tall Louisianan named Ruth, a nerdy-smart African Franco-American boy, Jasper, Wilder, and Maisie. As a prize, they're allowed to go up the space ladder -- into actual space... where it's revealed that there are more things in heaven and earth than are dreamnt of in their philosophies, that they're needed for A Noble Purpose, and that they're kind of in a Fantastic Four/Incredible Hulk/Iron Man movie... only not.

Their gig as Superhero teens is fairly short -- with ultimate power comes ultimate responsibility, and some members of the team aren't up for it. An accident quickly divides loyalties and confuses priorities. Adults are less trustworthy than feared - some downright frighteningly evil. Maisie thinks Wilder is someone she must stick with -- but it turns out that maybe he's not. When her parents and everything she holds dear is threatened, Maisie pushes herself to become more than she is -- more than she thought she could be -- to take on every threat. But, is it enough to just be dangerous? Or, do you need sidekicks to be a real superhero? 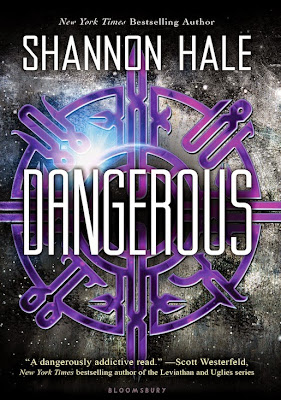 Critical Reader Reaction: This book moved fast -- fast, fast, fast. It is chaotic, packed with plot, and twists and turns and it just -- man. I felt in places that it had some details that stood out more than they needed to -- things which seemed important, but weren't, and things which seemed throwaway, but were integral to the story arc. The pacing was so breakneck it was just too fast for real emotional resonance in spots; I wanted SO MUCH to be closer to the main character especially, but didn't quite click with her. I believe I had trouble seeing the character, because she had trouble seeing herself. The author doesn't characterize her as owning her identity, in many ways. If readers asked Maisie how she self-characterized, it would probably have been something like a.) smart girl b.) astronaut aspiration c.) her parent's daughter, d.) differently-abled, and e.) half Paraguayan. Which is fine -- especially when a person is made up of two cultures, sometimes they feel more at home in a middle-space that is both and neither. I get that, but it still felt, in some ways, that Maisie should have been more realized.

Part of the plot is that Maisie is home-schooled. While this isn't seen as a negative in the book, she has about zero knowledge of boys other than Luther -- so Wilder's smarmy "heyyyy, sexy Latina" come-ons doesn't bother her as much as it seems it should. She leaves the camp with him, takes risks, is physical with him - with not a peep from her inner mind. For me, this was hard to take, and also heavily foreshadowed the inevitable triangle. Still, as a reader, I was uncomfortable with Wilder until the end -- I didn't buy the protagonist's trust in him, or her hormonal whatevers that allowed her to trust him, in spite of everything. Her forgiveness seems very easily bought.

There were things which didn't feel true to me -- like the fact that the teens were insanely smart -- all of them. They quoted Macbeth and ran around with Frost poems in the back of their minds. While the kids were meant to be genius level math-science folks, the English lit stuff seemed out of character. And then, the adults -- of all the parents in the novel, only ONE set was anywhere near decent -- but it's clear that parents would have complicated the story arc, so they were essentially written off. The adults in the novel are just as madcap and/or hopeless as the teens -- the two apparently brilliant scientists are downplayed, Dr. Howell, into a poorly socialized, emotionally stunted juggler, and Dr. Barnes into strictly muscle...

Dr. Dragon Barnes is the Aerospace Chief of Operations. He is described as large and he's usually added into the mix for muscle. He fights battles for the diminutive Howell, he smooths things out for her socially, and he otherwise pretty well carries the world on his back for her.

Dragon, as Maisie calls him, was taken from a group home by Dr. Howell, because she saw his brilliance (that trope is called The Noble Savage, which is a minority who is brought up from his mean and humble beginnings and raised to greatness). Dragon's role in DANGEROUS is to supply wisdom and support to Maisie -- and to Howell -- at the right moments, and he has a lot of good lines like "I've got you, Brown." He is a rock of strength and imparts his calm wisdom, helping her to overcome her fears, and go forward. He seems to have few qualms or agendas of his own and few or no issues with Howell's actions; his only goal is to Make It All Happen.

OF COURSE HE DIES. This is what is troubling to me: that his whole purpose was to allow Howell to achieve her purpose. This is really true to the trope of the Magical Negro. Obviously, the author didn't do this on purpose, but it was such a predictable death that readers will spot it well before it happens. What made me sad is that Maisie didn't even grieve. Granted, he was part of a group of nutjobs who essentially manufactured a way for her to be exposed to a major danger, but it felt oddly out of character for her to not really... react. Howell grieved -- but though he was the most stable and helpful adult to her, Maisie was like, "Huh, Howell will always miss him," and she went on. It was a little distressing.

There are coincidences and betrayals left and right - crosses and double-crosses. I found myself distressed by some of the brute force used -- fitting in with superhero movies and comic books, but in a novel, harder to take. In some ways, it felt like the characters in the entire novel were kind of manipulated and lacking agency -- but I also know that the pacing, metaphorical "explosions," and our current love of superhero films is where it's at in terms of popular culture right now, and will bring a lot of teens into really liking this book, or at least feeling that the action is familiar. There are puns, there is poetry, there is a lot of skill in the narrative. I hope that Shannon Hale writes more YA, and more speculative fiction, and while this one wasn't my favorite, I know it will find its audience.

Authorial Asides: Hale has written extensively about her views on writing and on inclusiveness. She explores the idea that it would be more "convenient" and easier as an author to write dominant culture "neutral" characters, and talks about why she didn't; more recently, she blogged about the fact that we're none of us really able-bodied. It's good food for thought.

I picked up a copy of this novel at the library. You can find DANGEROUS by SHANNON HALE online, or at an independent bookstore near you!