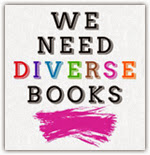 Have you had a chance to hear what went on at BEA? This morning I listened to a podcast of the panel at BEA made up of Ellen Oh (PROPHECY Series), Aisha Saeed (Written in the Stars, 2015), Marieke Nijkamp, founder of DiversifYA, Lamar Giles (Fake ID) and Mike Jung (Geeks, Girls, and Secret Identities). Special Guests included acclaimed Authors Grace Lin (Where the Mountain Meets the Moon), Matt de la Peña (The Living) and Jacqueline Woodson (Beneath a Meth Moon).

The panel was moderated by I.W. Gregorio (None of the Above, 2015). Each of the authors got a chance to talk about the first diverse book they'd read (IF IT HADN'T BEEN FOR YOON JUN, by Marie G. Lee was mine, just FYI), and they reiterated, for those who didn't notice, that Lee & Low/TU Books has re-announced their NEW VISIONS AWARD:

"The NEW VISIONS AWARD will be given for a middle grade or young adult fantasy, science fiction, or mystery novel by a writer of color. The Award winner receives a cash grant of $1000 and our standard publication contract, including our basic advance and royalties for a first time author. An Honor Award winner will receive a cash grant of $500."

This panel was full of great, brilliant people with plenty to say, and really good questions... but it was way, way, way too short. There was vital and necessary conversation, but a single, hour-long panel in a tiny corner of BEA - filled to standing room only, with people turned away at the door for fire safety reasons - was simply not enough time to get into things really deeply. One thing that was said, however, was that there'd be a Diverse Books Festival sometime in 2016, in Washington D.C. Yay, right? It is to be "the first of its kind."

Or, so they said. 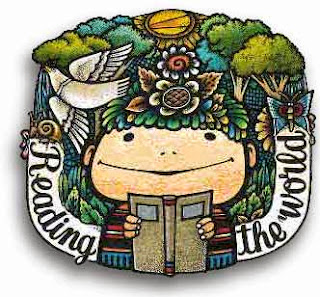 Anybody else remember the University of San Francisco's Department of Education putting on Reading The World?

What you may not know is that USF chose to get involved in this after a similar Cal State Hayward (CSUH) conference had ended after a nine year run. Beverley Hock, who had started the one day conference as a graduate student, finished it as a doctoral candidate, and her time in the area had ended. Disappointed that there was no other venue to talk about diverse children's books, from 1998-2009, under the skilled direction of Dr. Alma Flor Ada and her education graduate students, USF started READING THE WORLD.

This two-day event brought education students, librarians, authors, teachers, and the community together to interact with an impressive list of authors including Ashley Bryan, Nikki Giovanni, Yuyi Morales, Peter Sis, Rosemary Wells, Lady Jane Yolen, Arnold Adoff, Virginia Hamilton, Joseph Bruchac, Naomi Shihab Nye, Rita Williams Garcia, Jack Zipes -- the list of luminaries goes on and on. READING THE WORLD was utterly fantastic -- it was a thrill to attend, and to rub shoulders with all of these amazing authors who were Out There, Doing This Amazing Thing. Especially as there are only one or two children's literature conferences west of the Mississippi, these gatherings were a little taste of heaven for those who were apprehensive about "multicultural books" as diverse books were called at that time, and how they would work in their classrooms and libraries, how they would sell and be accepted by the community, and what they needed to be. There were presentations on all kinds of things, including cultural identity, folklore, gender identity, social justice, storytelling, and more. It was brilliant, and even without social media, people knew about it and attended and came away with SO MUCH. I wish they could have gone on hosting it forever.

To be clear, I bring these guys up because they were awesome. I just want to give props to Dr. Alma Flor Ada, all of those graduate students over the years, and all of the people who threw their backs into this. Before Twitter hashtags made information sharing quick and easy. Before Facebook — in the creaky old days of MySpace. Before iPhones. Before social media was a “thing.” THANK YOU, READING THE WORLD. You were amazing.

But, time moves on, funding gets cut, people move. Dr. Alma Flor is a professor emeritus now, and the torch has been passed. Though not the first to dip a toe in serious celebrations of diversity, #WeNeedDiverseBooks is nevertheless taking the challenge East of the Mississippi. But, things are awfully quiet around these parts. Maybe the West Coast doesn't think we need to really talk about diversity - because we're pretty diverse out here, and more comfortable with it? And yet, there's considerable excitement surrounding the KidlitCon's plan to have diversity be our central theme this October. I think we've got plenty to talk about, don't you? Hope to see you there.

Posted by tanita✿davis at 9:53 AM
Labels: What We Do, Who We Are

Thanks for sharing that lovely history with us! It's so important to keep passing it on and celebrating what has been done, as well as what needs to be done. Moving forward!

@ Andi: Yes -- uniting everyone who has made the effort is important - grabbing all the people who've come before and saying, "Hey, join us on this new quest!" is really important to me.