TURNING PAGES: SUMMER OF THE MARIPOSAS, by Guadalupe Garcia McCall

When I studied the work of Gabriel Garcia Marquez in grad school, I heard the word "magical realism" overwhelmingly. We talked a lot about the concept as defined by his work, and by the work of Latin American writers.

We also talked about how magical realism can be a vastly overused catchall category into which many books are crammed.

Let's be specific. Borrowing from John Sayles' definition, magical realism is a writing approach rooted in the ordinary which blends the fantastic and the real, and the mythic with the specific to create something overall new and extraordinary. I'd say SUMMER OF THE MARIPOSAS comes firmly under that definition.

Reader Gut Reaction: There are few examples of YA writing that include true magical realism. It's misconstrued, generally, and people tend to think that any story which begins in the modern world is magical realism. Well, yes, and ...no. You know what the line is for me? That faith and myth are given equal weight. That anything can happen - and does, with fewer rules. That there's an element of the surreal as well as the supernatural. I believe that fairytales were the magical realism of their day - and this novel reads a little like a modern-day fairytale. There's the journey, the quest. There are goddesses and demons. There is justice and mercy. All the elements of a fable - including the lesson at the end - are lined up clearly for us to see.

I read along and kept thinking, "Wait. WAIT. They cannot DO that. But, as it turns out, they could. And as a reader I just had to... let go and let the adventure take me. I admit to being somewhat of an earth-bound reader sometimes. But eventually, I let the mariposas take me...

Concerning Character: Oy, are there characters. The cinco hermanitas are themselves a force, but the individual narrator is the eldest, Odilia. She's a struggling eldest - barely older than the next in line, Juanita, who challenges her leadership at every turn. And then there's Delia and Velia - a tight twin-team who speak with one - snarky - voice. Even the baby throws her weight around. It's not easy leading this band of rag-tag survivors, because mostly they lead themselves, and don't listen to reason. Or anyone. That makes them both funny and painful to watch - they're just like sisters I know.

Let's not talk about the non-central characters - Papa - oy, he's a piece of work - Abuelita, the crazy cast of folk they meet throughout their quest... these are colorful characters, crowding the stage, all waiting for their turn to speak or act. It's The Odyssey, with Mexican-American, female adventurers set against the background of a whole new land.

Recommended for Fans Of...: Louis Sachar’s HOLES, BECAUSE OF WINN-DIXIE, by Kate DiCamillo and pretty much anything Francesca Lia Block, as she tends to be the queen of YA magical realism. I also think David Levithan's BOY MEETS BOY counts as magical realism. And then there are all of the books by Latin American authors marketed toward adults, etc. etc. etc. It's there. You can find more, if you love this. 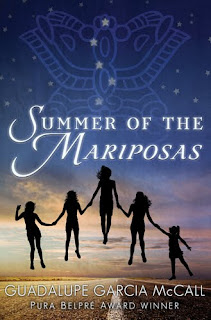 Themes & Things: I don't often so clearly see a thematic drift, but boy, is this book about not getting the cart ahead of the horse (or is that not putting too much sour cream in the tacos? I LOVE the funny little cockeyed aphorisms). The girls are confronted at every turn by their mistakes. Sometimes more verbally and specifically than others, they are reminded of the dangers of impetuosity (not that it makes a difference for a long time) and the problems inherent in just jumping on your first idea and running with it, caution be darned. It bites them in the backside over and over and over and OVER again.

Not surprisingly, this book is also about forgiveness. They must first forgive themselves... and then the circle widens. They must practice mercy - first on themselves, and then... on so many others.

Universal themes? Oh, yes. Explored in numinous and oblique ways? Yes, yes again. Because of the nature of magical realism, and the vast age-spread amongst the sisters, this book would work well for older MG and YA as well, I think.

Cover Chatter: Oh, it's rare indeed that a cover meshes so beautifully with EVERYTHING in the entire story, but this is it. Cinco hermanitos, rising, like their own constellation. Long live the Garza girls.


FTC: This book provided, courtesy of Tu Books, by NetGalley. The review was unsolicited, and no money exchanged hands. Thank you.

You can find SUMMER OF THE MARIPOSAS by Guadalupe Garcia McCall at Tu Books, and at chain and independent bookstores near you!

Okay. I need to check this out. I haven't read anything with magical realism since Like Water for Chocolate--years ago!!

It's really a treat - I thought I wasn't into it, but it surprised me.

Sounds interesting--I've been hearing a bit of buzz about it here and there. I'm not always a fan of magical realism, but it all depends on how it's done...