It's like we were just waiting for September to get out of the way, so we could launch: 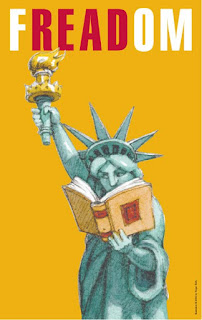 ** It's CYBILS Season! Nominations, October 1 - 15 (with a few new rules for self-pubbed and publishers - do read before you nominate!),

AND!!! It's also the nomination period for the fifth annual 28 Days Later, which runs from Oct. 2 - Nov. 2 (award winners will be celebrated during Black History Month in February). Nominate, and hold up your favorite books.

Post Kidlitcon, which we've heard was all things marvelous, the blogsphere is gearing up for an active, engaged autumn. Roll on, October; let's keep the party going!

Posted by tanita✿davis at 2:14 PM
Labels: Cybils News, Happenings, What We Do, Who We Are

Thanks for these, especially the Brown Book Shelf shout out.