CYBILS F/SF: THE CURIOSITIES, by the Merry Sisters of Fate

Just before we left for Scotland, I lost my short story writing group. We were the doughty Flickr Fiction Friday writers - able to spin tales of madness from a mere photographic prompt. We were writing without nets, slightly insane, and able to leap small puddles in a single bound -- and then Twitter happened. Most people stopped telling stories or communicating in sentences longer than forty characters. Too wordy for that, I refused to join the revolution, and was left behind.

At a loss, I started lurking at the newly launched The Merry Sisters of Fate blog. And was ...well, envious. Maybe because they started with fewer people, or with more deliberate intent, but these writers had a THING going - cohesive, inventive, and whatever other lyrical superlatives you might offer. They clicked, and their work was clearly going places.

The clever margin notes, doodles on the edges of the pages, and thematic sectioning pull this together in an organized fashion. There is as much here to charm as to kill; stories both dark and deadly are presented for your delight. Pick up a copy, and curl up with the leftover Halloween candy on All Soul's Night.

Reader Gut Reaction: This book is for writers. Be you a fully launched wordsmith or a fledgling chick, the margin notes these three writers have included are full of both in-jokes and teasing, as well as some genuine nuggets of good sense as well about characterization, tone, single-sentence worldbuilding, romance, magical limits, the works. In just a few sentences, they've put together a short How To on fantasy writing. This book is for teen readers. If you're attracted to dark faeries, guyliner, big boots, and mysterious pasts, this one is for you. The stories depicting high school as a dark stage on which vicious acts are wrought are very apt, indeed. This book is for adult readers. The themes are complicated, layered, nuanced -- and a sense of darkness and peril at every turn reflects the actual word and the inner world. There is nothing simple here. Nothing. And, nothing is as it seems...

Concerning Character: More than individual characters with names, these stories played with tropes and types. The Girl Who Was The Heroine/Victim - but turned that right upside down on its head, by out-maneuvering Evil. The Boy Who Was Hero/Victim -- I think especially of the dragon slayer kid (Does he survive his last battle, or not?) -- and how he falls, or stands and walks away from the fight. The Girl Who Invites Danger. The Boys Who Understand Sacrifice -- the minor characters from every fairytale you ever read live here, their lives of unexplored depth until uncovered by these writers.

While not every story was stupendously awesome - I especially wasn't sold on the section of Arthurian tales, simply because not even Marion Zimmer Bradley can make me unequivocally love Arthurian tales - they were all can't-look-away compelling, and especially with flash fiction, which in a collection can be so uneven, it's hard to ask for more.

I might just add that these stories were also brilliantly edited by Andrew Karre - and everyone knows a great editor makes a good thing its very best.

Recommended for Fans Of...: This was an unexpectedly literary collection, so I compare it to books written and edited by Kelly Link, Ellen Datlow, Ellen Kushner, Margo Lanagan, and Delia Sherman. Occasionally, there are some moments of Margaret Atwood in a few stories, and you know that means They Are Good. The words "slipstream fiction" come to mind - so it's not Zombies v. Unicorns, but deeper and broader than that; you get the feeling that these stories could go any direction. 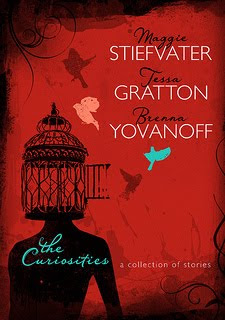 Cover Chatter - and Artwork in General: Everyone knows by now that Maggie Stiefvater was a commercial artist before her writing took off, so the doodles in the book are Quality Doodles - the sort of thing that makes you a little envious of what the pad next to the Stiefvater kitchen phone looks like. The cover is striking -- murkiness with a flash of contrast. It works well for the tone of the book, which is itself kind of mysterious and murky, with flashes of insight - which may hit you differently the second time you read the book.


I'm happy to note that, even as we speak, plans are afoot to reassemble our short story group. We are neither all American women, or women at all, or fantasy writers, so I don't expect our group to resemble this trio of writers - and who would wish for that anyway? We're excited to anticipate new stories - stay tuned for us to throw out a link every once in awhile. Who knows - maybe together we'll weave something as magical as these Fates. We would count ourselves lucky indeed.

You can find THE CURIOSITIES by Tess Gratton, Maggie Stiefvater, and Brenna Yovanoff at an independent bookstore near you!

Really love this cover - it jumped right at me when I saw it online (and added it to the Ballou Library list!)

I love the cover, too! (It reminds me I've been itching to do some artwork...and not had any time to do so.) And Andrew Karre is fab. I'll keep an eye out for this one, definitely.

And, oh, I can hardly wait to get back to our own short fiction group!