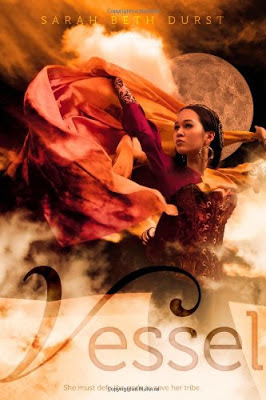 Reader Gut Reaction:I'd been looking forward to reading Sarah Beth Durst's newest. It promised a return to a more traditional type of fantasy structure, and it did not disappoint. It's got quests, deities, adventure, survival, desperate tactics—everything a fantasy fan could want, AND a strong, butt-kicking female protagonist.

Liyana is supposed to be the vessel for her goddess, Bayla. That's what she's been trained to do her entire short life until this point, and today's the day when the goddess will be called down to inhabit her body and do good works to help the clan survive. But when the dancing and ceremonies are over…her goddess doesn't come. Naturally, despite her honored position, this provokes mixed feelings in her. After all, she didn't have to die. That's a good thing, right? But…was she somehow not good enough? Her clan worries that might be the case, and so they shun her, leaving her in the desert and moving on without her.

Before she can do much other than grieve, Korbyn appears. He actually IS a god, contained in his human vessel. And he says the other deities are missing. They set off on a journey around the desert to find the other clans' vessels, and figure out what happened to their gods and goddesses…because without them, their clans won't survive. Problem is, of course…if they succeed, she'll die. And if they don't, her clan will.

Concerning Character: Liyana is a clever and strong-minded protagonist. Because we are immediately plunged into a tense situation in which she is blamed for something not under her control, we easily sympathize with her, and cheer for her every time she is able to gain control over something in her life. After all, she was meant to be a vessel—something that, by definition, is passive and self-annihilating. Instead, she is alive, for now, and she begins to grow into a self NOT defined by her role as vessel. And Korbyn, the god, is changed, too—I liked watching the shifting balance of power between the two of them, the complexity of their need to rely on one another to succeed. And, of course, there is just a bit of romance to make things even more thorny and tangled.

The other vessels were distinctive in personality, too, and it was an enjoyable read to follow their wildly differing reactions to the quandary they all found themselves in. The deities, too, had their personalities, and reminded me a bit of the quarreling, meddlesome Greek gods and goddesses.

Recommended for Fans Of...: Tamora Pierce has a great quote on the back jacket of this one, and I'd agree strongly that if you are a Pierce fan, you'll enjoy this one. It's got a similar setting, with cultures not unlike our own Earth cultures, but different, too; and characters who are clearly from different ethnicities with distinct physical characteristics. If you like Kristin Cashore, Kathleen Duey, Robin McKinley…all authors who are great at writing female protagonists and creating fully-formed worlds…you'll like this one.

Themes & Things: One of the major themes posed even at the beginning of this book is the meaning and value of self-sacrifice, and the idea that even longstanding traditions might need to be questioned and changed once in a while. Sometimes you can get more valuable work done through saving yourself rather than annihilating yourself, through compromise and shared effort rather than giving yourself up entirely to others' demands. This book also, of course, has threads of romance and friendship, of self-discovery, and of persistence in the face of adversity and the unknown.

You can find THIS BOOK by This Author online, or at an independent bookstore near you!
Posted by Sarah Stevenson at 8:00 AM
Labels: Adventure, AF, Fantasy/Sci-Fi, Multicultural Fiction, Reviews

I also enjoyed this. And the cover is the most stunning cover I've seen this year. So well done.

I'd say this is Sarah Beth Durst's best so far - just a really complete story.

I think the model's head is a teensy bit too large, compared to hips/waist width, but the colors and all else work well. I'm learning so much about Photoshop...