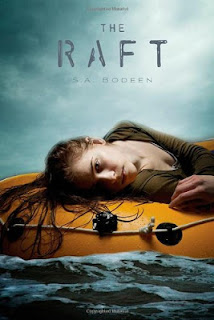 Reader Gut Reaction: What if you were stranded on a raft in the middle of the Pacific Ocean, no food except a handful of Skittles, and nobody knows you're even gone? That's the premise of S.A. Bodeen's latest page-turner, The Raft. It's a harrowing survival tale, of the kind that (for me, at least) start with those what-ifs that form the basis of late-night campfire conversations about being stranded on a desert island. It's an irresistible setup for a story. But it's deadly serious, too.

Robie and her parents live, of all places, on Midway Island. It's completely remote. They're scientists, and for the duration of their time there, she's getting homeschooled. So she's pretty independent and self-sufficient. Sometimes to a fault…

…like when she's decided to spend some time with her aunt in Honolulu, but then her aunt is called to the mainland on last-minute business. Robie says she'll be fine on her own, but then she decides to head for home after all on the next cargo flight. A doomed flight, as it turns out…

Concerning Character: Self-sufficient as she is, Robie is a very believable character for a survival story. Despite her independence, though, she is also realistically vulnerable to fear, panic, and despair, and all of these emotions (and then some) arise when she's suddenly trapped on the plane's emergency raft in the middle of the ocean with a semi-conscious stranger—the copilot, Max. Then we've got an old-fashioned man-vs-nature conflict--but also man-vs-himself (or herself, in this case) as Robie's survival depends on her inner strength as well as her outer fortitude.

Recommended for Fans Of...: Modern-day survival tales like Gary Paulson's Hatchet books (reviewed here), or even John Marsden's semi-dystopian Tomorrow, When the War Began series (reviewed here). Of course, if you enjoyed Bodeen's earlier dystopian novel The Compound, you'll want to check this one out.

Themes & Things: I'm always a big fan of stories where characters are forced to dig deep to tap heretofore unknown depths of resourcefulness. It makes the suspense and fear particularly rewarding when the protagonist lives to see another day, and it's not all because of luck. Of course, Robie has plenty of luck both good and bad, and also has to live with some of the consequences of her decisions—can she bring herself to eat some of the same animals she's studied and learned to love on Midway? It's a tightly written, quickly plotted tale with a fun twist at the end, and though I had a few quibbles about choices made by Robie, overall I think this one will be appealing for action lovers and perhaps even reluctant readers.

You can find The Raft by S.A. Bodeen online, or at an independent bookstore near you!
Posted by Sarah Stevenson at 12:26 PM
Labels: Adventure, AF, Realistic Fiction, Reviews, Suspense

I'm sure this is a fab story; the cover is the only thing that kind of squicks me. I do not love the Dead Girl thing. At all. At least she's on an actual raft.