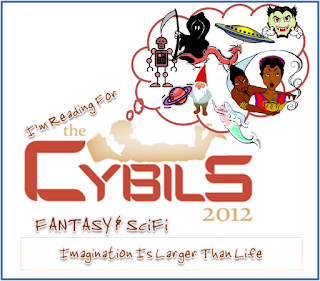 POW! That's the sound of the starter's gun. Aaaaaand we're off! It's the first Official (there have been unofficial ones, before this month) Cybils book review, and it's... a ... zombie novel?

But, wait! Wait! Everyone knows this reviewer hates zombie novels, don't they??

Reader Gut Reaction: Okay, yeah. It's a zombie novel. I read the title and had a nauseated shudder. Yuck. Zombies. Don't like 'em. I was fully prepared to have to exercise my Fifty Pages rights. I opened it. And then, I had a moment of horror. THE NOVEL IS FROM THE ZOMBIE'S POV. WHAAA???? Zombies are the, like, brainless, brain-munching villains of the piece. THEY DON'T GET TO HAVE A POINT OF VIEW. NO! No, no, no! And I read, cranky and opinionated, muttering, and... Started caring what a zombie... thought.

Concerning Character: Well, at least this much made sense right off... our zombie doesn't have a name. It can't remember it. It's ... R. R., probably with three syllables. Maybe. It was maybe some kind of ... young professional... something. It's in a white shirt, gray slacks, and a red tie. A red tie. R's friend M. laughs at this, in a ...voiceless kind of ... unable to really laugh, what with lacking the airflow and mental grasp for a sense of humor kind of way.

Yeah, they're dead. But... R. ... thinks. Each time he eats a brain, the sparks of light - memories - color - life from that victim remain with him. And he craves them -- he needs them. Without them, he's almost a blank slate. Of course, if you keep killing people, there will be no more memories. This is kind of a problem, so he... um... keeps one? And...

And, then things get weird.

Yeah, yeah. It's a zombie book. Get over it. 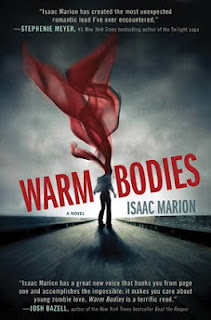 Recommended for Fans Of...: GENERATION DEAD, by Daniel Waters, DEARLY DEPARTED, by Lia Habel, ROT AND RUIN, etc., by Jonathan Maberry, THE FOREST OF HANDS AND TEETH, etc., by Carrie Ryan

Cover Chatter: It's stark - asphalt. Gray on gray on gray and white. An amorphous figure, leaking... red... mist. And a red title. It's evocative, and it's stark and it works. Though the figure is, upon close study, male, it's fuzzy enough that you could have it stand in for anyone. Now, a novel about a zombie chick would have her face plastered on here... apparently, guy novels mean guys don't have to look at themselves. I hope someday we figure out that girls don't always need to stare at a face, either.

Of course, there is the point that a zombie guy's face might be pretty... eh, never mind. Read the book.

Authorial Asides: Apparently this is Isaac Marion's first book. He's thirty or thirty-one, from Seattle, and ... that's it. From the bio: "He is not married, has no children, and did not go to college or win any prizes." However, he must have read a lot, and done a lot of thinking, because some parts of this book read like a philosophy paper (well, one of the ones which takes deep thoughts and writes them in basic-you-can-get-this English, anyway). Well done, Mr. Marion. May you have many more excellent and surprising books to your credit.


FTC: This book was a library copy; my opinions are unsolicited.
You can find WARM BODIES by Isaac Marion at an independent bookstore near you!

Posted by tanita✿davis at 1:58 AM
Labels: Cybils, Fantasy/Sci-Fi, Reviews, Romance

I love your Cybils button!

but am not entirely convinced this is a book for me...though since you don't like zombies either, but still enjoyed it, I might try hard to take your word for it!

You're welcome to use my button. I love making them every year.

You might like this book. It's... weirdly transcendent. I'm bewildered still how I even came to enjoy it.

I also love your button. So cool. And great to see Cybils reviews coming already, before the nominations are even closed.

I'm just so excited to be able to get these from my library (yay, American library system) now that I'm trying to get a jump on some of my faves.

This sounds like an interesting one...I'm not a huge fan of zombie books, either, but I make the occasional exception. :)

HAHAHAHAHAH ohhhh. I would die laughing if Isaac won this. I mean, I want Warm Bodies to win. It's a great book, great for young adults. I firmly believe this, and I can't wait for the movie! But also this: http://www.readnowsleeplater.com/2012/10/ya-shame-and-stigma.html. So I hope he wins because somehow in my twisted brain, awesomeness is the best revenge.

Oh ha, just re-checked the nomination list and it's ineligible because of the publication date. Sigh! (It was an honor to be nominated?)

@ Althea - oh, wow. It's an interesting book, and I'm a bit sad that he felt that it being YA held it back.