CYBILS F/SF: The Girl With Borrowed Wings, by Rinsai Rosetti

This is a story that I had trouble categorizing. It's horrifically realistic, in so many ways... but, because of its setting in the modern-day realistic world, the little sidesteps it takes into Other made me think of magical realism. This is a quiet novel -- restrained, shall we say -- but it's the depths of emotion and imagination and faith which eventually blow the lid off of things.

Reader Gut Reaction: A lot of people read nineteenth century novels of manners and revel in the precise examinations of custom, values, and social mores. There's a lot of brow-waggling conjecture, for instance, about how repressed the Victorians were, from their expectations for propriety to their dance steps, and this fascinates contemporary readers. This novel delves into some of the same modes of examination, but with more modern subjects, but still brings to mind the worlds of Jane Austen, George Eliot, Charlotte Brontë, and Edith Wharton. As a matter of fact, I looked to see if the novel was a translation, because something of the author's nomadic roots show in her writing style.

There's an element of parable in this novel - and some thematic things about having faith that love can empower, and though the novel is imperfect -- sometimes the voices is a tiny bit too distant, details are not examined to my satisfaction, and the ending is too abrupt a turnaround to be believable -- it's a debut novel, and the author has time for many more great things to come. This is a jagged little multicultural bildungsroman that takes a few leaps of faith, and brings the reader along for the ride.

Concerning Character: Frenenqer Paje is accustomed to not belonging. For most of her seventeen years, she and her parents have lived in Thailand, Japan, Costa Rica, and Costa Rica. Wherever she's gone, she's been a stranger. Her father keeps the family on the move, ostensibly for his work, and now they have settled in Al Ayren, where people live quietly, young ladies cover their hair, and where the locals live in strict adherence to the Islamic faith. At the international school where she now attends, deep within this desert oasis, Frenenqer has a sort of secretary - a girl who tolerates her, and whom she tolerates, who always knows the assignments and what's required. Frenenquer knows they're not really friends, but really... she wouldn't know what to do with a friend, anyway. 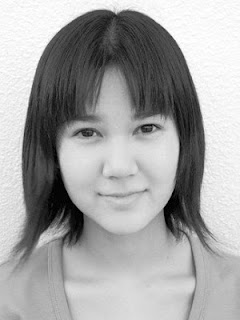 Frenenqer means "restraint" in some language or other, and this is all she has been, all of her life: restrained. As a tiny child, her father scolded her mother because she bounced and chattered too much. As an older girl, her titanic struggle with her mother was to be allowed to walk alone at dusk, to the end of the block. The Paje's lives are circumscribed by Tiberio Paje's need for peace, quiet, and order. Doors are to be shut quietly, or Frenenqer has to stand and open and close them over and over again. She isn't to be wild. She isn't to be excitable. She isn't to be too demonstrative, to speak excessively, to read excessively, to eat or sleep too much, to be too... anything. Certainly she is never to commit the exuberance of error which her father merely refers to in a shower of spit as -- "Pfft." She is to only do what her father's lists of commandments tell her to, and not a single thing more. Frenenqer's only escape from the sapless and perfect marble sculpture world he requires of her is books. She reads and dreams that she can fly -- up over the compound wall, away from the oasis, into the desert, and toward freedom.

Frenenqer understands vaguely that her life isn't normal, that through her adherence to perfectionism, she's drowning in loneliness. When she happens to see a filthy cat left for dead at a bazaar, she abruptly veers into rebellion. To her father's wordless rage, and her mother's horror, she insists on bringing it home to heal it or let it die in peace. Instead, the cat turns out to be Frenenqer's salvation. Sangris, a Free Person who lives outside of the rules of Islam, the oasis, and the natural world, can be anything and anyone. He opens the world to Frenenqer, but the world is large - and terrifying. Can she take hold of the opportunity offered to her? Or, does the colorless path her father has carved out for her -- the world of safety and obedience -- already own her soul? 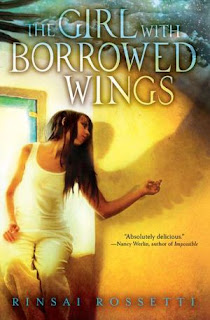 Recommended for Fans Of...: KETURAH AND LORD DEATH by Martine Leavitt, the restrained women's novels of Margaret Atwood, including THE HANDMAID'S TALE - and the works of Jane Austen, George Eliot, Charlotte Brontë, and Edith Wharton.

Authorial Asides: Rinsai Rosetti, the Thai-Italian author pictured above, wrote this novel in college, and was published by age 21. Her extensive globetrekking has led her all over the place, and the last place she lived was the United Arab Emirates, which shows clearly in the setting of this story. Rosetti's many travels show up in her writing style as well - creating a more fluid, almost restful prose style -- something evocative of a long-past era.

Cover Chatter: While I don't love the cover, the fact that it is a drawing and not a photograph gives it points for creativity. The shadow cast on the wall behind Frenenqer's arm is fairly brilliant, and the top of the cover shows misty greens and blues trailing from the edge of a wing. It makes perfect sense.

Frenenqer describes her life taking place in a series of three white boxes - her home, her blocky, white school, and the blocky white car which carries her in between these places. If anything, I believe that the cover of this novel errs on the side of too much color -- Frenenqer's life is so circumscribed, so bound up in lists and rules and beliefs that the first several chapters of the novel come across like drowning in white -- there's the restraint of being bound so that one is unable to breathe. The cover doesn't quite perfectly reflect all of the details of the novel -- so you're going to have to just pick it up, and read it.

FTC: This has been an unsolicited review, based on a library book.

You can find THE GIRL WITH BORROWED WINGS by Rinsai Rosetti at an independent bookstore near you!