HAPPY WEEKEND! Wishing you time to sleep in, great autumn treats, and good books at your fingertips.

Let's face it: every year, there are a lot of books which should have been on the Cybils list and don't make it. Some are just under the line for time, and will either make it on next year, or others are simply lost in the shuffle of books which get a bigger, earlier buzz. That's one of the reasons we review here - not to just regurgitate jacket copy on the other books people are talking about, but to highlight something you may have missed. Today I'm highlighting two short fiction anthologies which are perfect for a gloomy autumn - for a wind-whistling, shutters banging All Soul's Night, or a foggy-weekend-morning-cup-of-tea-and-nest-of-blankets time.

“No one can doubt that the wave of the future is not the conquest of the world by a single dogmatic creed but the liberation of the diverse energies of free nations and free men. No one can doubt that cooperation in the pursuit of knowledge must lead to freedom of the mind and freedom of the soul.” —President John F. Kennedy, from a speech at University of California, March 23, 1962, emphasis mine

Reader Gut Reaction: DIVERSE ENERGIES is edited by the adorable Joe Monti, and Grenadian adult SF author Tobias Buckell who who lived on a boat when he was a kid. (I have been slightly envious of his life for a long while because of this.) Other contributors of the eleven include URSULA Awesome K. LEGUIN (EARTHSEA, POWERS series), Paolo Bacigalupi (SHIP BREAKER, DROWNED CITIES), and Malinda Lo (ASH, HUNTRESS, ADAPTATION). I expected something good coming to this anthology -- and I wasn't disappointed. Another TU BOOKS success! 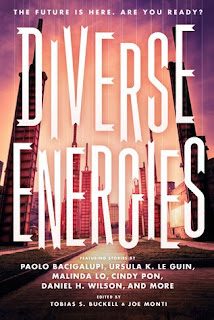 Concerning Character(s): Though the quote from which this anthology takes its title is about "the wave of the future" and liberation, the stories aren't about the freewheeling new world of tomorrow. Nope, this is mostly literary dystopia - very polished, very precisely and beautifully worded, and wow, very GRIM sometimes. As always, there are stories I liked better than others, but these worked together as a whole fairly well. I think Daniel H. Wilson's “Freshee’s Frogurt” was the most upsetting of the lot - a robot runs amok, and it's ugly -- the sort of tragedy you might call senseless, except... it changes one man's life a tiny bit. In “Gods of Dimming Light” by Greg van Eekhout, we learn a definition of heroism that defined the entire book for me -- I think a whole novel could be built out of that short. “Uncertainty Principle” is by K. Tempest Bradford, and actually influenced my dreams -- I kept dreaming that everyone was changing, but me. I love weird timeskip stories like this one - and the ending is a bit sad. Every time the time changes, something is lost, after all. Malinda Lo somehow manages to give us bittersweet love amidst the lies and ruins of society with "Good Girl," while Cindy Pon follows with another glimpse of a future Taipei - where even girls who have everything wish for just a day beneath the sky. I also enjoyed “Pattern Recognition” by Ken Liu, because the sort of "kids playing video games" type of life is one of those nightmare scenarios which could really be true to live - and reminded me of a Margaret Haddix Peterson scenario. The final story, “Solitude”, by Dame Ursula, is a reprint from THE BIRTHDAY OF THE WORLD 2002, but it was nice to revisit one of those intensely detailed, slightly worrying Hainish sociology stories - this one about a society which had broken the bonds of community in favor of solitude, and how the child of a sociologist, ignored by her mother, eventually finds her new society's mores more reasonable than her own. 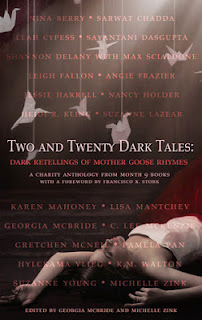 Reader Gut Reaction: TWO AND TWENTY DARK TALES is contributed to by twenty YA authors, including Karen Mahoney (FALLING TO ASH, IRON WITCH), Lisa Mantchev (EYES LIKE STARS, Théâtre Illuminata series), Heidi R. Kling (SEA), and Francisco Stork (MARCELLO IN THE REAL WORLD, IRISES, etc.), and is edited by Gretchen McBride and Michelle Zink (PROPHESY OF THE SISTERS series). Though set in the darkness of fey and faerylands, many these stories have a grim ring of triumph as the characters outwit death and fate. This anthology takes Mother Goose rhymes and spins whole stories from them -- stories that cleave more closely to dangerous worlds of the old Grimm tales. Many of the rhymes are unfamiliar to most readers, but will still appeal to those who enjoy fairytale retellings.

My favorites were Sarwat Chadda (THE DEVIL'S KISS, DARK GODDESS, ASH MISTRY AND THE SAVAGE FORTRESS)'s “Sing a Song of Sixpence" with its human blackbird, reminiscent of Tamora Pierce's bird shifting characters. The King in his counting house, the maid in the garden - they're all there. “Clockwork," by Leah Cypress begins quietly - and then rolls forward like a snowball. The mouse ran up the clock - and came away changed. A delicious snippet of story with an unbelievably brave conclusion.

A couple of the spookiest are “Wee Willie Winkie” by Leigh Fallon, the story of a girl who lies about her age to get a job in a dead end city filled with oldesters. She gets the job easily - there seem to be no other young people applying for work. Unfortunately, she doesn't realize that having a job isn't the issue - it's lying about her age. All under-sixteens in this small Irish town must be in bed before eight... or receive a visit from their nightmares. In “Boys And Girls Come Out To Play” by Angie Frazier a less familiar rhyme tells the tale of being called out - but by witches. A father tries to protect his daughter, a daughter tries to protect her sister, and in the end... no one is safe.

A reversal of the Beauty and the Beast tale, Karen Mahoney's “One For Sorrow” features another birdman, this time in the guise of a victim - fortunately not for long. Perhaps my very favorite was Lisa Mantchev's “Those Who Whisper.” It's a story of retribution, told with her usual brilliant attention to voice and detail - and includes even more birds.

On balance, TWO AND TWENTY DARK TALES is much more uneven than DIVERSE ENERGIES. There is a lot of creativity in DIVERSE, and each story, though vastly different, seems to fit with each other into a whole. Regrettably, TWO AND TWENTY is a less cohesive mix with some well-spun tales and others comprised strictly of shallow drama and attempts to manipulate the reader with abrupt conclusions and incomprehensible plot twists. Still, both these collections contain their share of gems and are worth a look-see.


You can find DIVERSE ENERGIES edited by Tobias Buckell and Joe Monti and TWO AND TWENTY DARK TALES: Dark Retellings of Mother Goose Rhymes, edited by Georgia McBride, with online retailers, or at a brick and mortar independent bookstore near you!

Oh, wow--these sound exciting. I'd heard of Diverse Energies, but not the other one. Now I'm envious and TOTALLY want to be part of an anthology! :)