In a Cybils crop filled with plenty of dystopia and -- still! -- vampires, this is a fantasy tale in the more traditional vein. It doesn't begin with "once upon a time," but it has the classic fantasy feel which makes it an engaging and satisfying read.

Reader Gut Reaction: This is a Quest novel, and there's a feminine version of the Hero's Journey going on. Senna is raised in ignorance of her heritage, spit into that rarefied world in the midst of it being threatened, and must make her way and take her place within that world, and play the part which only she can play. This is a solid, tried and true plot device, and it works. Through some parts of the novel, the reader might feel mired in mud, as the resolution stalls, but overall, this moves reasonably well. The conclusion leaves room for either one book, or more.

Concerning Character: As is typical for me when I read novels based strongly in the Hero's Journey trope, I have a hard time liking the Hero(ine) at first. They come across as resentful, immature, and blind, often making impetuous decisions that really cost. Senna is blind to an entire world, and when she discovers it, she is both awed and resentful. Anger at her mother eventually gives way to self-blame, and she doubts the guardians who are sent to help her. Senna has a few more leagues to travel on the Journey, because of her own hardheadedness, but in the end 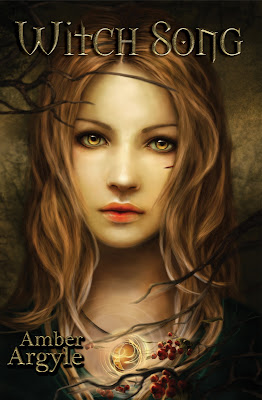 Recommended for Fans Of...: The Crystal Singer series by Anne McCaffrey, The Spellsong War by L.E. Modesitt, Jr., Neil Gaiman's Neverwhere, China Miéville's King Rat, and any other fantasy novel which uses music as a powerful force.

Themes & Things: Imperfect, impetuous heroines are a definite must for the Hero(ine)'s Journey. Senna is ignorant, impatient, infuriated and inept by turns. Her success is assured only through her perseverance, which is a main thematic element of the Hero's Journey. A secondary theme is that of strong women -- supported by strong men. Sometimes in novels praising strong women, the men are completely unsung, and it's refreshing to see someone keep the balance right. Well done, Amber Argyle.

Authorial Asides: According to the About the Author section in the back of the book, Amber Argyle has a real face, and is not a pseudonym. (The euphonious-ness of her first and last name together made me think she'd made it up.) Argyle is a Utah writer who has "worked as a short order cook, janitor, and staff member in a mental institution. All of which has given her great insight into the human condition and has made for some unique characters." Indeed.

You can find WITCH SONG at an independent bookstore near you!
Posted by tanita✿davis at 6:30 AM
Labels: Cybils, Fantasy/Sci-Fi, Reviews

My to read pile is a teetering...but in a good way. Thanks for your thoughts on this one!

Amber Argyle IS a great name. Not sure about that cover, though...

@ Aquafortis: I do NOT love the cover, but I was pleasantly surprised by the rest.

I love a good heroine's quest story. I just wrote my thesis on the heroine's journey, so I'm always on the lookout for good books to add to my bibliography. Since the premise harkens me back to Kate Constable's Chanters of Tremaris series (in a vague way), I'll look for this book.