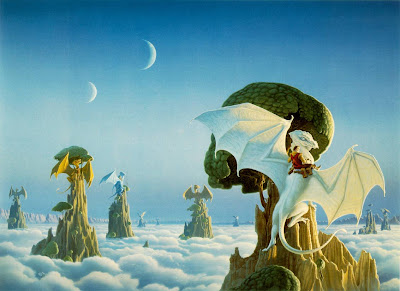 All The Weyrs of Pern, by Michael Whelan
This was my computer desktop picture for much of the early 90's.

Have a seat. Close your eyes.
Go back in memory to your favorite Anne McCaffrey book.
Does it include dragons?
(Incidentally, were you into dragons about the time you were into horses?)

As you are by now aware, Anne McCaffrey, prolific publisher of science fiction books and short stories has ended her journey around the sun, at age 85.

When I read the news, the first thing I thought was, "and thus ends an era." 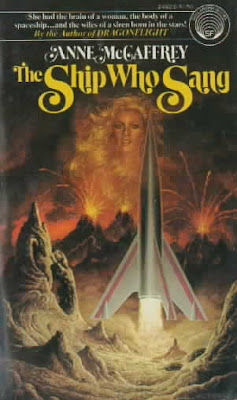 For some reason, though I read and loved Menolly and the Dragonriders and the Harper Hall books, and liked the dragons as well as anyone, I never loved them. Not as much as I loved... the ships.

The Ship That Sang was probably the greatest book, ever, and was published in 1961-9, as a series of shorts published in various magazines. The novels that followed it were stories of people trapped, by disability, within their bodies, given the freedom of the stars. These were some of the earliest, "friendly" tales of cyborgs, in which a man-machine hybrid was not some mindless killer, but a complex and alive person, just incorporating differences into their bodies. 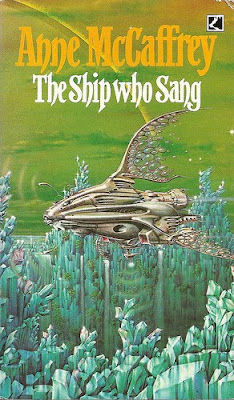 For some reason, this hooked into my imagination, and set it spinning.
(That, and the crazy '60's - 80's era paperback covers. Those probably had something to do with my excess of imagination. And, possibly, nightmares.)

There were more dragon books, a unicorn series, and some sea-people stories. There were tons of books marketed to adults, the relationships in which were strongly flavored with the 60's version of the Battle of the Sexes. Later, there were tales of new settlements, twins, ESP, pirates, and yet more dragons. But my stubborn favorite has remained the Brainship books. And oddly enough, those were Anne McCaffrey's favorites, too.

She was the first woman to win a Hugo. She was the first woman to win the Nebula. And though many of her books are looked at kind of sideways by many Serious Science Fiction Aficionados, she was a woman who went, in the late fifties and sixties, into realms traditionally only open to men, and she opened them up - with unique and strange and incisive stories that dealt with the sexual politics of the day, but also which dealt with the reaches of science as it was known then.

You don't have to like all of her books, or any of her books, but you've gotta respect the heck out of that. She opened the doors for the women whose science fiction writing I respect today -- and they're keeping it open for the next generation.

It's always sad to lose someone during the holidays, and we send our hearts out to the McCaffreys at this time. But, we at Wonderland also salute the pioneering imagination of this Grand Dame, and join with her thousands of other fans in saying "thanks for the memories." As long as we keep reading, the magic remains alive.

The Ships are still singing, and now singing her home.


These are the Ship books:
The first Helva compilation novel was followed by a series of team-written novels, including 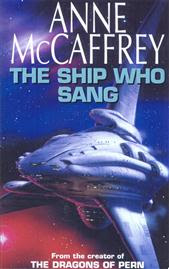 Well-covered in most public libraries, Anne McCaffrey's books are everywhere. If you've never read anything by her before, ask a librarian for their favorite of her books, and start there. Or, start with the ships...

from Wikipedia: The American Library Association in 1999 cited The Ship Who Sang and the two early Pern trilogies (Dragonriders and Harper Hall), when McCaffrey received the annual Margaret A. Edwards Award for her "lifetime contribution in writing for teens."
Posted by tanita✿davis at 1:29 AM
Labels: Random Notes and Errata, What We Do, Who We Are

What a lovely tribute. I was shocked to hear the news! How sad! I remember the first book of hers that I read: Dragonsdawn.

I still remember my mom handing me Dragonflight when I was about 12. My favorites were the Harper Hall dragon books, too, but I also really liked the Crystal Singer books.

Funny, I was never into horses the way I was into dragons. And I think it was probably Michael Whelan--who did many of her cover illustrations--who really made me want to be a cover illustrator in particular. I spent SO many hours copying his images of dragons from Anne McCaffrey's books as well as Melanie Rawn's dragon books (which I didn't like as well but of course I loved the covers!).

I read a lot of the Dragonriders books when I was a teenager, although I missed the Ship books entirely. I may have to read one. I mean, if you say it's one of the best books EVER...