This book is a 2011 Cybils nominee for teen sci-fi/fantasy. 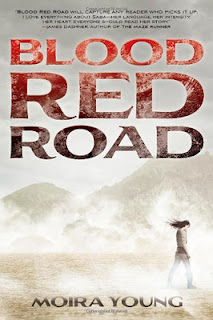 Reader Gut Reaction: A dystopian adventure with the feel of Mad Max and a girl who kicks butt--what's not to like? Really, there is a lot to like about this book. The narrator, Saba, lives in a harsh, desolate world already, just eking out a living in dried-out, dusty Silverlake (no relation to the one in L.A., from what I can tell, though that did throw me a little). When her father dies and her twin brother Lugh is kidnapped by scary road warrior types on horseback, she sets off with her pet crow Nero to get him back. Her quest leads her through a set of harrowing adventures that made this book difficult to put down: from cage fighting to dust sailing to confronting insane drug lords.

A few things did throw me, though: the most significant was the fact that the book is written in a sort of dialect that reads like rural speech—dropping the "g" at the end of "-ing" words, saying "I says" and "she don't," etc.--and that took some time to get used to reading and might be the kind of thing that gets on some readers' nerves. Generally speaking, it fits the story, but at times I felt like it got in the way. I also had a minor issue with the realism of having a pet crow (according to what I've been told, they're far more ornery and, er, violently protective than depicted here). Overall, though, this is an action-packed story that's hard to put down. Oh, and this may sound like a spoiler, but it's something I was glad for and others will be happy to know: THE CROW DOESN'T DIE. There. I said it. No dead pets. Thank the gods.

Concerning Character: Saba (which, by the way, means "morning" in Urdu--and, of course, Lugh was the Bright One in Irish/Celtic myth) is the kind of character you want to root for all the way--she's a fighter, she's stubborn and won't give in, and even when she's doing the right thing for the wrong reasons and being hardheaded, her inner core of goodness remains unchanged. Sure, she's rough around the edges--everyone is, in this setting—but she'd do anything for her family, even her annoying little sister Emmi. And by "anything"...well, it means she does a lot of horrific things, but none of them as terrible as the things that the mysterious King is supposedly doing. The bad guys in this one are BAD, and that makes for constant tension throughout the story that keeps you turning the pages. Although some of the characters are a bit over the top--much like a Mad Max movie--fans of the gritter, more post-apocalyptic dystopia genre will probably like this one.

Recommended for Fans Of...: House of the Scorpion by Nancy Farmer; Riddley Walker by Russell Hoban (an adult book, but suitable as a crossover—anyway, I read it as a teen); A Canticle for Leibowitz by Walter M. Miller, Jr. (reviewed here; also an adult book) and other post-apocalyptic fiction.

Themes & Things: The strength of family bonds is one of the primary themes driving this book--and what forges those bonds to begin with. Lugh, as Saba's twin, never had to work hard for her love, but Emmi, on the other hand, was just the annoying little sister, something which changes over the course of the story. That dovetails nicely with another major theme: opening one's heart to others, in simple friendship and in times of need. Both of these are things Saba has trouble with, much to the consternation of her potential love interest, Jack. Frankly, love isn't something she's had on her mind much at all, obsessed as she is with getting her brother back. Oh, yes, obsession and its benefits as well as its downside--another driving force in this story, and we're not talking just about Saba but also about those whose obsessions send them down an unsavory path. For me, both theme and character were somewhat subordinate to plot and action in this one, and so I'd suggest it for fans of plot-driven stories with a lot of atmosphere and setting detail, like The Hunger Games.

You can find Blood Red Road at an independent bookstore near you!
Posted by Sarah Stevenson at 8:00 AM
Labels: Adventure, AF, Dystopian, Fantasy/Sci-Fi, Reviews, Sisters

OOh, JUST got this one today, and looking forward to it this weekend!

yeah i was glad the crow survived this was my problem with chaoc walking to many pets i loved died. But than again im an obssesive animal loveri