Reader Gut Reaction:I missed this author's whole mermaid phase, so a mythology novel seems a return to a familiar topic for me, as her BOOTCAMP GODDESS was a Cybil selection a few years ago. Tera Lynn Childs does Greek mythology quite well, and a book with the fun setting of San Francisco, combined with the idea that it does indeed contain strange monsters, made this book lots of fun. Fast paced, light adventure, and ghoulish monsters for all.

Concerning Character: Gretchen would like to have a normal life - well, maybe not really. As nice as it is to live in a great, modern townhouse, and have no curfew and no one to be concerned about her comings and goings, she really wishes her mentor, Ursula, would answer her phone once in awhile. Things are getting really weird in Gretchen's world; there's practically the constant reek of monsters, and she's getting called out all over the city to dispatch them. She's hardly getting to sleep at night, and if she can't pull it together, there are going to be teachers phoning home... only, Ursuala isn't home. And Gretchen will just have to keep on trying to fulfill her destiny ... until she dies trying.

Grace keeps reminding herself that everything is now going to be different. A computer scholarship to a prestigious San Francisco high school means that she has the chance to go on to Stanford - and it's worth it to her to change schools and take a gamble on not only a dream, but changing her own realities. Unfortunately, it's not that easy to be someone bold and daring when you've spent all your time being "boring" and "doormat" before. Grace meets a cute guy who actually seems into her - which of course is why she suddenly starts hallucinating a dude with the head of a bull, and another one that looks like a snake with feathers.

The very best dates are when you smell something so bad you puke a little, right?

Halfway through the book, readers meet Greer... who really would just like to be left alone... 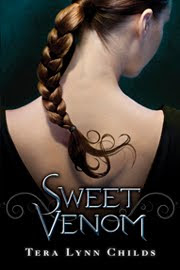 Themes & Things: Even if you're unfamiliar with the story of the Gorgons, if you enjoy adventures with strong female leads, you'll enjoy this novel. Themes of self-sufficiency and cooperation to overcome obstacles plus a subplot about belonging, and how we can make family will make this a fun series.

Cover Chatter: A clever cover - yes, we've done female backs in YA, but the thick braid, resembling the heavy, arched body of a serpent, and the hair tendrils curling to resemble the forked tongue of a snake made me want to read the book before I even knew what it was about. Plus, Sweet Venom is a pretty good title, too.

You can find SWEET VENOM at an independent bookstore near you!
Posted by tanita✿davis at 6:45 AM
Labels: Cybils, Fantasy/Sci-Fi, Mythology, Reviews

I'm gonna have to look for this. I had it buried on my wish list and forgot about it. Sad!

Gorgon mythology sounds like a great premise for a story! I've never read her work before, and this seems like a good place to start.

I've continued playing wow as basically a single player game. I don't raid, am in a guild almost entirely for guild perks lotro gold, and rarely interact with other players or guild members
cheap lotro gold.


I have a stable of alts on which I grind various things (dungeons, resources, old content, whatever). I'm sure I'll get to the point where I have 10-12 85's and nowhere else to go
buy lotro gold. I mostly play now because its a cheap time killer. $15 a month is less than buying console games (when I quit
wow gold, I tried sticking to PS3, it got expensive).