Once there were two sisters who were separated from their father. They lost their innocence, but were left with their anger...

PSA: This book is about sisters. It is about sisterhood. It is about loving, and hating. It is about innocence, and its end. Despite the bland Library of Congress description (Dating? Social customs? African Americans? Really, guys?) it is pretty much a supernatural murder mystery, with more bloodshed -- and more mystery -- than you might be comfortable with at first. To be blunt, the body count is pretty darned high, and the attitudes about scrubbing blood from beneath one's manicure are pretty blasé, so This Might Disturb. I would not presume to list age restrictions, but were this a movie, its rating would take into consideration violence and sexual situations. Definitely better for mature readers, and of course adults (those aren't always the same thing).

Reader Gut Reaction: Dia Reeves is frankly an intriguing author to me, and so far, it has always paid to follow her down the twisted little path of story through the hedge-mazes of the her bizarre inner universe. She is an excellent writer whose quirky humor is paired with the richly imagined, bloodstained, and haunted parallel worlds of wherever she's writing about, plus the South. There's something parablesque in her novels, and there are, as in all good Southern fictions, stories within stories.

It's hard to communicate to you the tight turns of phrase ("Cadbury-smooth skin" which gives hints of both color and richness without clubbing you over the head), ironic, sardonic humor (Oh, the letters from the nuts in the community), the subtle nuances of meaning or the true-telling in this clearly fictional novel without spoiling it, so this review will be necessarily lacking in detail. Just read the book.

Concerning Character: Fancy and Kit Cordelle are sisters who are the children of a notorious serial killer. They're closer than close, practically twins, practically the same person. Even their wishes are the same, or so Fancy thinks.

Their mother works the graveyard shift at the hospital, so they have uninterrupted - and unsupervised - time together in the warm summers in Portrero. Portreto is a weird town in and of itself, a place of doors where monsters lurk, where green-clad warriors make it their business to patrol the Dark Park, and where transients come and go, and are pretty much universally reviled. Potrero-ites stick together - everyone else can go hang. It takes a little something special to open a door and make a place for yourself in a community like Portreo. Not everybody who visits stays. Not everyone who visits survives...

While Fancy has been mostly the observer, Kit's favorite hobby used to be animal dissection, but it's lately become more interesting to discover the ins and outs of the human body. Their father had an interest that direction, after all. Prowlers, kidnappers, molesters get a bit more than they bargained for with Kit and Fancy ... these are the children of the notorious Bonesaw Killer, after all.

Lazy days are spent reading and answering the mail ("What I love about Guthrie Cordell is that not only is he one of the few black serial killers, he is one of the best..."), looking through the doors of Fancy's other world to see what's there, and, well, finding new people to play with (Kit & Fancy's playmates tend to wear out easily). When their mother begins to suspect that Kit and Fancy are not using their summer vacation, er, wisely, she decrees that the girls go to summer school. Fancy balks. What does she need other people for? Kit, on the other hand, thrills with the chance to meet people and air out her hormones. Kit starts to get to know people. She changes. She gets a ... boyfriend.

And the furiously betrayed Fancy's not having any of that nonsense...

Beware of the girl who can wield a sharp knife... and open doors into other worlds... 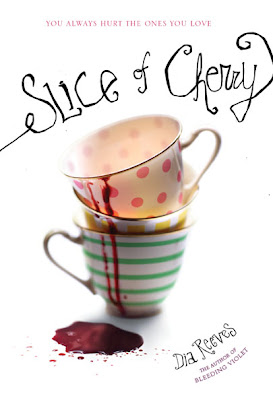 Recommended for Fans Of...: Well, that's hard to say. If you like horror novels with a strong family theme, this one's for you. Alyxandra Harvey's Hearts at Stake series is the only thing I can think of which might slightly compare because of the tight family bonds. Jack Gantos' The Love Curse of the Rumbaughs because the family that dissects together... um. Yeah. (Flowers in the Attic comes to mind, but Reeves' writing is stellar, and rises far above that of Andrews'.)

Themes & Things: This novel is, at heart, a Bildungsroman, a the story of growth and development within the context of a defined social order. It is kicked off by deep loss, and is earmarked by the arduous effort of the individual to find a place for themselves within the social order. Of course, the social order is a bit...er, disordered in this novel, but the conclusion is still the same - a place is found, and the individual can now see that they belong.

This story has the flavor of parable, of gossipy urban legend transformed by oral narrative into the wisdom of the elders, tales of warning and woe. Did you ever hear about The Girl Who Stayed Out Too Late? Well, she Met A Bad End. Kit and Fancy have A Bad End prewritten into their story. They live in a powerful world and have strange abilities, abilities which help them fit into the world of monsters they inhabit. Their ancestor, Cherry, was certainly as fey - maybe a witch? Maybe not. They are "slices" of Cherry, and with their father the murderer (and their penchant for slicing people), chips off the ol' block. Theirs was to be an odd tale regardless.

And yet: they are also an average, albeit freaky, family. They squabble and argue (mainly about whether or not their victims should live or die). They meet boys (and imagine doing great violence to them - in Fancy's case, anyway). They fall in love - and their swains bring them gifts. They ask questions (sometimes with the use of drugs) to find out truths. They grow up - eventually. And they find out that change isn't always as bad as it seems. Sometimes, the best way to enjoy the sundae is to eat the cherry on top.

Maybe the theme of this novel is that even the freakiest of us are all pretty much the same.

Cover Chatter: The beauty of light-limned, fine china, the quirkiness of its polka dots and stripes. The freak factor of streaks and spatters. Oh, yeah. The cover is clean and striking and highlights both the Southern gentility of the girls - tea drinking, as all good Southern girls do, thank you very much - and the creep factor - bodily fluid on the cups - instead of the romance. As the book's jacket flap reads, "Happiness is a bloody knife." The cover goes right along with that, and the only thing they could have done better was have a few crumbs of red velvet cake.

You can find SLICE OF CHERRY at an independent bookstore near you! Be prepared to shiver, wince, and laugh... and then worry about yourself for laughing.
Posted by tanita✿davis at 2:44 AM
Labels: Cybils, Fantasy/Sci-Fi, Reviews, Sisters, Suspense

I'm not a horror reader, but your description of this one has me really intrigued--it sounds like it takes a unique angle on the whole paranormal mystery genre.