I don't have a review for you today; instead, I wanted to do a quick shout-out to a few longtime blogging and writing friends, perspicacious reviewers all, who have BOOKS OF THEIR OWN getting released in the coming months and whose wonderful writing deserves attention and fame and fortune. :)

First and perhaps foremost to THIS blog is the fact that our very own Tanita has a new book coming out in May of 2012 entitled Happy Families--check out that awesome cover. The book's about a set of fraternal twins, Ysabel and Justin, and the Amazon blurb says "their father has a secret--one that threatens to destroy the twins' happy family and life as they know it." There's already been considerable speculation amongst our blogging friends as to what that secret might be, to which I simply say "NYAH NYAH" because I know what it i-is. But you'll have to read it to find out.

And then, coming out VERY soon--next week, in fact--is a memoir (not YA) by our good friend Colleen Mondor of Chasing Ray entitled The Map of My Dead Pilots: The Dangerous Game of Flying in Alaska. Having just read it, I can definitely tell you that this one is poignant, at times shocking, and always tough to put down. It deserves that Booklist starred review. (Full disclosure: I'm also helping Colleen revamp her website to include info about the book--so I've been extra excited and enthusiastic about it!) 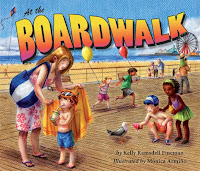 I'm just as excited that our friend Kelly Fineman of Writing and Ruminating has a picture book due out in March of 2012 from Tiger Tales Press called At the Boardwalk. Just look at that adorably wonderful cover illustration--I can hardly wait to force this one on my youngest nephew for his birthday in May. He's got to read SOMETHING that isn't about trucks or trains, after all.

Also coming soon from frequent visitor and kindred blog bud writerjenn--aka Jennifer Hubbard--is a new novel entitled Try Not to Breathe, which sounds dark, difficult, gripping--and important. And, on the topic of not-breathing (uh, kinda) also in January comes the latest from blogging author and kindred spirit Holly Cupala, Don't Breathe a Word. Don't confuse the two, though they promise to be equally important books--the former is about depression, while the latter is about abuse and life on the street. You'll just have to read them both.
Posted by Sarah Stevenson at 4:02 PM
Labels: AF, Book News, Views

Eek! Ta muchly, as the girls around here say. I've had the cover art for this and have been holding onto it, until I get "the official okay" to share it... and then it shows up on Amazon and everywhere else, which makes me laugh!

I love that both Holly and Jennifer have "breathe" in their titles - it always amazes me how we have some sort of YA zeitgeist that kicks in at times and makes things topically - or title-y - relevant all at once.

And WOOT for Kelly and Colleen's books!

Yay Tanita, and Colleen and Kelly! (and for Jennifer and Holly, although I don't know them...)

What's the secret!!! I don't wanna wait until May. I love the cover of Don't Breathe A Word. Congrats to all.

This is SO EXCITING! I just can't wait for spring and all these wonderful new books! One of the things I love about blogging is making friends with writers like these and sharing the birth of their stories.

Wow, I'm honored not only to have my book featured here, but to have it featured in this company! With Tanita and Kelly and Colleen (whose book is sitting right next to me, having just arrived mail-order) and Holly!

Jennifer, I'd forgotten about the Secret titles!! But you are so right. Spooky!

Jennifer, it's all part of the plan, right? Eventually, the words you choose in common will create a sentence which will lead to solving a murder mystery or something. Or, lead to great treasure.

So far, we've got Secret Breathing.

Things to look forward to!

No fair bragging about knowing The Big Secret of Tanita's novel, though.