"I wonder which will get you killed faster -- your loyalty, or your stubbornness?"

Sooo, I've made it plain how much I hate angel fiction, right? Somehow, vampires, unicorns, orcs and all the rest don't bother me, but I've never liked the whole angel thing - from the fat, naked Cupid with wings and a lap blanket to the Michael Landon-Della Reece-tele-extravaganza, to the much more recent novel craze thing. Somehow, angels bug me more because of the element of faith involved, unlike, say, with werewolves. We have faith that they don't exist. (Um, right?) Now, I'm all about making hamburger out of sacred cow, to quote Mark Twain, but the depictions of fictional angels are so random. They run the gamut of saccharine sweet to plain scary... (much like vampires. Hm). No one can agree on any kind of lore.

Well, anyway. I had all of my reasons lined up for why I don't the whole angel thing, but now I have to say, I don't like most angel fiction. I ran across a book that has elements of courage and sacrifice... and dystopia. Which made a good thing better.

Reader Gut Reaction: The familiar Bay Area setting (Mountain View!), Penryn's iron will, and the dire circumstances of "the end of days" came together to make this an eminently readable and memorable book.

Concerning Character: Penryn just wants to keep it together long enough to make everyone safe. Ever since her Dad left, her mother has been off in schizophrenia-land, and returning to lucidity less and less often. Six weeks ago, after the world as Penryn knew it was demolished by these monsters called angels, she lost whatever was left of the girl she'd been. Gangs have taken over the cities, and lawlessness and sprawled bodies are a daily sight. Penryn's main goal is to keep her wheelchair bound little sister, Paige, fed and safe, and get her family to a less populated area.

Their escape was going so well, until the angels landed in the middle of the highway, and began fighting with each other.

And then, they took Paige. 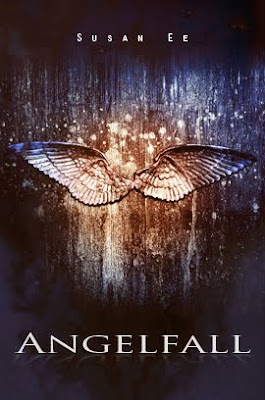 Themes & Things: It's hard to name a singular theme for this book, but "Appearances are deceiving," would be a good one. Or maybe, "It's not what you think." I could add something about judging books by their covers, but that would be just overkill.

And both of them were wrong.

Authorial Asides: This is author Susan Ee's first novel, but her short stories can be found in Realms of Fantasy magazine and in other places. She is quoted as saying that she chose to write about angels because of the gamut of story about them - from destroying army to dimpled cherub. "Like unicorns and vampires, they must have an amazing public relations department." Hah!

You can only find this book from Amazon Digital Services for Kindle or Barnes & Noble for Nook - but eventually it will be a paper book, too. Meanwhile, don't forget that if you don't have a reader, both Kindle and Nook have readers for computers.
Posted by tanita✿davis at 6:11 AM
Labels: Cybils, Fantasy/Sci-Fi, Reviews

I have to admit--despite myself, I'm intrigued by the premise, especially with all of that horrible Left Behind stuff floating around out there.

I'm generally not a fan of angel fiction either, with the notable exception of Madeline L'Engle, though I don't think that's quite the same thing...