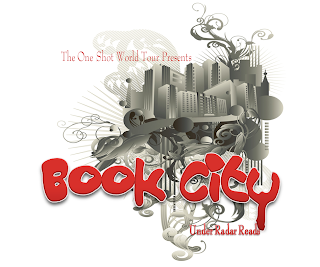 Welcome to Book City! (Do you not LUUURRRVE that graphic? Tanita made it! It's awesome, isn't it?)

London is one of those cities that will always be particularly meaningful in my life. It's where my parents met and lived for two years before I was born; it's where my dad first immigrated from Pakistan and made his home for more than fifteen years; it's where I spent a memorable summer working various random jobs between my junior and senior year of college. It's where I learned how to mix a gin and tonic, where I got hit on by a Scottish soccer hooligan, where I ran gleefully through a hedge maze and rode my first subway. It was the first overseas place I ever visited, as a baby and then as a four-year-old toddling around after my parents; again as a sullen thirteen-year-old, with my mother. It's a place where I have friends, where I have extended family, where I feel like I have invisible roots, however tenuous. 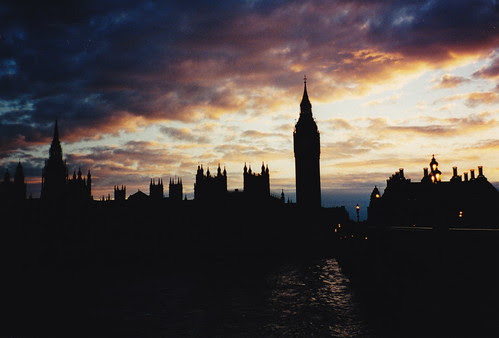 Maybe that's why books set in London always appeal to me, and as a fantasy fan, I'm particularly drawn to books about alternate Londons—past, present, or future. In this post, though, I wanted to focus on present-day alternate Londons, and take a quick look at two books that bring to life the world that lies just beneath or beside the London we know. If you're a fan of Philip Pullman's His Dark Materials books and their version of alternate Oxford, then you'll want to take a look at these.

One of them I've reviewed on this blog in the past: Un Lun Dun by China Miéville. In this book for younger YA/older MG audiences, twelve-year-old Zanna and her best friend Deeba accidentally stumble upon a secret entrance to UnLondon, a fantastical alternate version of the city they know and inhabit: "UnLondon is full of quirky magic, sly humor, and engaging, imaginative personages from the outlandish to the silly--reanimated rubbish that has seeped across the barrier from London, giant flies manned by crews of air-pirates, people with pincushions or diving helmets or occupied birdcages for heads." (from my earlier review) And, one of the things that I loved most about this book was not just that one of the main characters, Deeba, is South Asian, but also that she ends up being the sidekick who steals the show and has to save the day. Readers who've grown up with Wonderland and the Phantom Tollbooth, with Roald Dahl's zany scenarios, are sure to enjoy this one.

For older readers comes a book that's not specifically for YA audiences but will definitely appeal: Neil Gaiman's Neverwhere, which is actually a novelization of a BBC miniseries from the mid-90s. Having watched the miniseries as well as read the book, my opinion is that the book is superior, although that might be because I read the book first. In any case, this is another tale of a London that exists beside—in this case, beneath—present-day London. But in London Below, as Richard Mayhew discovers, there are new and unbelievable dangers as well as wonders, and if Richard can't navigate his way through and out (helping the mysterious young woman Door in the process) he may never be able to return to his regular life. What I loved most about this one was how Gaiman takes the old and intriguing names of well-known London locations, like Blackfriars, Knightsbridge, Seven Sisters, and Old Bailey, and gives them lives of their own with magical provenance: the Black Friars are actually a group of friars who hold a key that Richard must retrieve; Knightsbridge becomes the harrowing Night's Bridge. It's imaginative and fun, the kind of setting that you end up wishing really existed somehow.

Books like these end up adding another wonderful layer of story to a place that is already alive and bristling with centuries upon centuries of history and tales. For me, they enrich and inform the way I think about London, the way I experience it each time I'm fortunate enough to find myself there.

Fantastical Past Londons: Jonathan Strange and Mr. Norrell by Susanna Clarke, The Anubis Gates by Tim Powers, Black Book of Secrets by F.E. Higgins (the first two are written for adult readers, but would be fine for older YA)
Imagined Future Londons: Carbon Diaries by Saci Lloyd, How I Live Now by Meg Rosoff

Also, be sure to check out Jackie's post at Interactive Reader on historical London as well as Tanita's post on Terry Pratchett's truly zany city of Ankh-Morpork. The full One Shot schedule is available and updated throughout the day at Chasing Ray.
Posted by Sarah Stevenson at 12:38 PM
Labels: AF, Fantasy/Sci-Fi, One Shot World Tour, Reviews

LOVE Neverwhere - that was the first Gaiman book I read that really made me fall hard for him (then I went back and read all his stuff I missed!)

I've only been to London once, but it was for ten days, so it does count among the cities that I have an affection for. (Like I have a lot of them. So far just NYC and DC and London.)

I can't decide if I'd like Un Lun Dun or if I'd find it too creepy in its surreal style. "Occupied birdcages for heads," for instance, is kinda throwing me.

Un Lun Dun has been on my radar for years, but I haven't read it. You've certainly made me want to!

Like Jackie, Un Lun Dun has been on my radar for years. Also in my TBR pile since it was released. *slaps self upside head*

What a gorgeous post - sighing over the pictures. We were in London only a couple of intense days, but I was all over, on foot and on bus, and it definitely made an impression of HUGE! and FRENETIC! But with odd little corners of beauty and chatty people. It was freezing, though. Note to self: AVOID in March and November...

I love the cover of UN LUN DUN in that freaky, can't-stop-staring-ooh-shudder kind of way.