The Seems: The Split Second by John Hulme and Michael Wexler 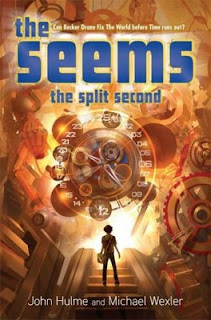 Part of this past week’s sequel splurge (well, not really a splurge, since I got them at the library) was the sequel to the 2008 Cybils nominee The Seems: The Glitch in Sleep, a quirky fantasy about a parallel world whose entire function is to make sure OUR world runs smoothly: The Seems. The second book continues the adventures of thirteen-year-old Becker Drane, the youngest Fixer in The Seems.

It appears that the shadowy underground organization known as the Tide has managed to steal a Second and split it—and much like splitting an atom, splitting a second could result in total chaos and destruction. The explosion in the Department of Time has caused leakages throughout The World—speedups and slowdowns—and the senior Fixer called in to defuse the bomb inexplicably disappeared upon explosion, and is presumed dead. Becker’s put on the case, and his journey to find the Split Second and fix the time leakages takes him from the Department of Time, to a live-action freefall through a panoply of other people’s Frozen Moments, to the dark and dangerous depths of Meanwhile in search of the elusive Time Being.

Like the first novel, the sequel is creative, fun, and fast-paced. The authors have created a humorous, tongue-in-cheek, but still fully-rounded world, and the action is nonstop. If you haven’t read the first one, the constant new terminology might seem a little relentless, but fortunately, there’s a helpful glossary at the back and numerous amusing appendices that will entertain even those familiar with the setting.

Buy The Seems: The Split Second from an independent bookstore near you!
Posted by Sarah Stevenson at 9:00 AM
Labels: AF, Fantasy/Sci-Fi, Guy Appeal, Humor, Reviews

Oh, I want to read this one. I really liked the first one -- a really fast-paced adventure.

What a great premise! I haven't read the first one, either - looks like I have two more books to add to my list.