Knowing Too Much: Boy Toy by Barry Lyga 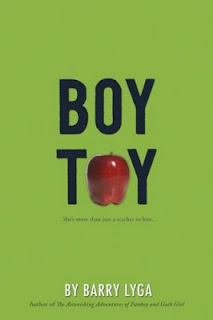 I’m sad to report that Barry Lyga’s Boy Toy has been in my TBR pile for an embarrassingly long time. However, I’m pleased to report that I’ve now read it, and though it’s not an easy story to read, Lyga should be commended not only for his writing chops but also for his courage in tackling the difficult subject of a teacher in a romantic "relationship" with a much younger student. And he does it without pulling any punches.

Every single character in this book is amazingly well-developed and each one has a role to play—whether they are complicit, ignorant, or confused about the situation. The story begins with narrator Josh almost ready to graduate from high school. He’s a successful baseball player and a whiz at math, but he doesn’t have many close friends. That’s because he lives in the kind of small town where everybody knows everybody else’s secrets—and his secret is the Elephant in the Room kind of secret.

For Josh, he’s just treading water until he can leave the town where people see him as That Kid. And then he finds out that Eve has been released from prison, and his life goes topsy turvy again. Even his friendship with Rachel—the first time he’s ever opened himself to the possibility of a romantic relationship since Eve, and the first time he’s ever really talked about what happened—even that seems tenuous and frightening.

Told in alternating sections that flip between present and past, this is an absorbing, well-crafted, and well-written book that drew me in on a very strong emotional level—I believed in the narrator and his pain, as well as his confusion and conflicted ideas about what truly happened when he was twelve. At the same time, it’s the sort of story that forces you to think about what it means to be a victim, what it means to be the perpetrator of an inappropriate relationship, and what it means to simply be flawed as all human beings are. This book was the 2006 Cybils YA winner, and it’s easy to see why it was a contender.

This is one of the best YA novels I've read in recent years and it was frustrating to learn about the insidious form of censorship it's encountered.

Boy Toy most definitely deserves all the rave reviews but the sales figures should be fantastic too.

I'm always sorry to hear about censorship--as if willful ignorance will somehow keep anything bad from ever happening to anyone.

Wow. I had not heard about this book, and wonder why I hadn't, now that I've read your review. Thank you for this.