Before I show you this toon, please note that I'm not certain of the frequency or regularity of Toon Thursday from this point forward (huh, perhaps I should've phrased that differently) but I do resolve to post cartoons from time to time and hopefully figure out a schedule that will work for my poor overworked brain. Fair? OK. Then here it is. It's not strictly writing-related, but those of you who've been tweeting and twittering may enjoy it. Starring Roxie (top) and Zelda (bottom). 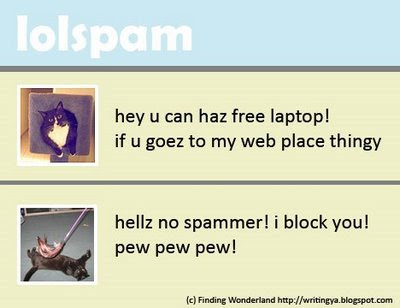 So there you go. Apologies to any trademarks I may have inadvertently infringed upon or deliberately parodied. No apologies to spam twitterers. No cats were harmed in the production of this cartoon. As for me personally, though I didn't actually draw anything this time, I found the process both therapeutic and highly amusing. But then, I'm easily amused. I hope it brings a little entertainment into your day as well.

While we're on the subject of toons, also go check out the list of Eisner nominees, which were recently announced and posted on GraphicNovelReporter.com. There are plenty of well-known names like Chris Ware, Sergio Aragones, Neil Gaiman, Lynda Barry, not to mention a large portion of Cybils nominees--especially in the Kids/Teens/Tweens categories. Do take a look--it's one of the premier and most-respected awards in the field of comics.

Who in their right mind tweets / twitters? I mean, really!

Just want to leave a shout out for Bongo Comics-- my day job-- for being up for a Best Short Story Eisner. Ian Boothby is a fantastic writer, and Nina Matsumoto a talented young artist. Whoot! I've got my fingers crossed! (Thanks, Aquafortis, for remembering your sequential art friends!)

Anything that snubs Spammers is therapeutic. Thank you.

Of course I always remember the sequential artists out there! Especially now, as I'm trying to formulate a graphic novel idea myself. :)

Yay for the return of Toon Thursday! And formulate that idea ASAP, 'cause I want to see a graphic novel from you quite soon. How about some Welsh mythology in the modern world type of thing? I'd read that. :)

Thanks, Sara! The GN idea doesn't have any Welsh mythology in it so far (though one of my earlier novel mss does...) but it will most likely be a collaboration with my husband doing a lot of the artwork. We hope to work on it while he's on sabbatical this upcoming year. I'm excited!!