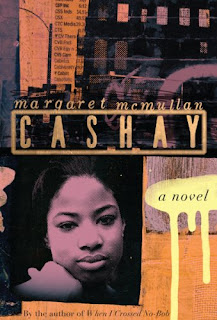 Cashay is just thirteen going on fourteen, but she’s growing up way too fast. When she’s not taking care of her younger sister Sashay, she’s dodging thugs in her inner-city Chicago neighborhood and trying to figure out how to feed their family when her mom doesn’t seem to care about anything except doing drugs with her seedy boyfriend.

And then, when Sashay is shot and killed, Cashay’s own hopes of surviving the projects seem to dwindle away to nothing. Her mother’s drug problems continue to worsen, and Cashay is forced to attend counseling and an after-school mentor program full of angry inner-city kids and successful white folks who couldn’t possibly have a clue what she’s going through.

But sometimes it’s not just about having a clue. It’s about finding a kindred spirit despite appearances and backgrounds, about letting yourself open up enough to find that person. When Cashay meets Allison, they seem to be polar opposites, but they find common ground in their loneliness, and forge a real bond. Allison tells Cashay she’s smart enough to apply to the charter school opening up in the new housing development nearby, and for the first time, Cashay allows herself to feel hope.

Above all, this IS a novel about hope, despite the gritty subject matter and the difficulty of reading about what is, for many young people, a grim reality. The development of the relationship between Cashay and Allison is handled with delicacy, turning what could have been simply an "urban problem novel" into a story about an unusual but life-saving friendship.

Note: This review was based on an advance review copy.