Save Humanity Now: The Tomorrow Code by Brian Falkner 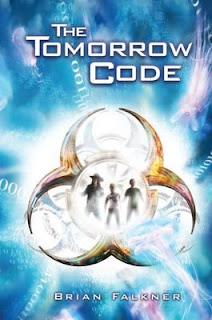 Tane and Rebecca are best friends, both in their second year of high school in Auckland, New Zealand. They've known each other practically forever, and can talk about anything and everything, from the most mundane of everyday topics to something as esoteric as time travel. Tane's sort of the quiet, creative one, while Rebecca is a math and computer whiz; so when Tane mentions the idea of transmitting data through time instead of people, Rebecca immediately starts thinking about how that might be possible, if you used a big enough satellite dish and were able to harness the energy of the universe's gamma-ray bursts.

When Rebecca gets hold of some of that raw gamma-ray data and writes a computer program to scan it for patterns, they get a real shock: somebody in the future seems to be sending them coded messages, and if they aren't able to interpret the messages properly, all of humanity could be in danger. How do they know the messages are from the future? The first message they receive is a series of numbers. Lotto numbers.

Unfortunately, the only way they can get hold of the Lotto money without making it a huge public deal is to confide in Tane's older brother Fatboy, a motorcycle-riding rebel of dubious reliability. Fatboy cashes the ticket and promises to help them out, but then he and Rebecca sort of become an item...something that makes Tane just a bit irritated. The relationship tension mounts as they find out more and more about a top-secret, dangerous experiment called the Chimera Project.

The stakes just keep getting higher in this suspenseful page-turner. Author Brian Falkner has created truly deep, interesting, textured characters that are easy to care about, and I enjoyed reading a contemporary sci-fi novel set in New Zealand, too. Even though I had to suspend my disbelief about a couple of things, I willingly did so and was not disappointed. It's got everything—lab experiments gone awry, deadly fog, coded messages, yellow submarines, and a nice twist towards the end. A great one for fans of dystopian novels and suspenseful adventures.

Buy The Tomorrow Code from an independent bookstore near you!
Posted by Sarah Stevenson at 9:19 AM
Labels: AF, Fantasy/Sci-Fi, Guy Appeal, Reviews, Suspense

Oh gosh. Another one to add to the list.