We Shall Overcome: Between Us Baxters by Bethany Hegedus 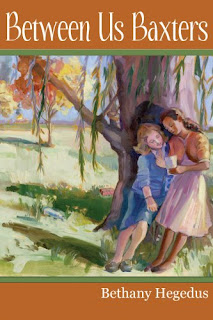 The Baxters are a poor white family living in 1959 Georgia, and twelve-year-old Polly certainly gets to hear about their undesirable social status both at school and at church. Even more humiliating is having to go to lunch every Sunday at the house of wealthy Meemaw, her mother's mother, and submit to constant criticism of her manners. But what stirs up the most talk is their family's friendship with the Biggs family, who are black. Timbre Ann Biggs is two years older than Polly and Polly's best friend, and their mothers are best friends, too—Aunt Henri used to work in Meemaw's house when Polly's Mama was growing up.

But there's a source of tension even between the two families—Sam Biggs owns a repair shop, one of the few colored businesses in town, and he's quite successful. So the Biggses are quite a bit better off financially. Polly is tired of wearing Timbre Ann's hand-me-downs, and her Daddy is resentful of her Mama's friendship with Aunt Henri. And to make matters worse, Daddy's lost his job and started drinking a lot. When violence starts to break out at colored businesses around town, tensions reach a boiling point not only between black and white residents but also between Polly and Timbre Ann.

Despite a few moments when I felt like the writer was leading me in a particular direction rather than letting things unfold, this was, overall, a touching look at the sad realities of a particular time and place in U.S. history. The story of Polly and Timbre Ann, the Baxters and the Biggses, holds the seeds of the story of civil rights in America. At the same time, on a more human scale, it shows how painful and difficult it can be to be brave enough to take a stand for friendship and peace when your own family seems to be falling apart. Polly, as a narrator, is very flawed but above all, very human, and the author does an admirable job with the complexity of both the characters and the situation.

Buy Between Us Baxters from an independent bookstore near you!
Posted by Sarah Stevenson at 12:49 PM
Labels: AF, Historical Fiction, Middle Grade, Realistic Fiction, Reviews

I'm always interesting in how many novels there are that portray African Americans in an historical setting -- I like the POV is from a Caucasian child, and that they're friends. Very interesting concept.

I already put this one in a bag of books for you. :)