Doing It for the Cause: The Kayla Chronicles by Sherri Winston 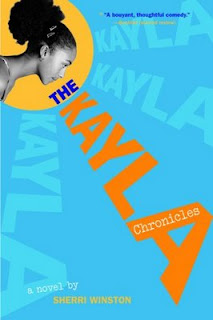 Kayla Dean and her best friend Rosalie are hard-core feminists. They idolize strong women of history and throw famous quotations at each other the way other teenage girls toss slang, and they both want to raise community awareness. But Kayla's taking her determination in a slightly different direction—she'd rather fight using the written word. Good thing her new school, the prestigious Royal Palm Academy, has an award-winning journalism program.

Their school also happens to boast a champion dance team, the Lady Lions—and rumor has it that the Lady Lions have unfair selection practices when it comes to who's worthy and who isn't. Kayla, an excellent dancer, has a decidedly pear-shaped figure and nonexistent fashion sense, a combination that Rosalie insists is a sure-fire fail for the dance team. And if—no, when--Kayla doesn't make the team, Rosalie says that will give them the journalistic exposé of the year.

But Kayla DOES make the team. And you know what? Those Lady Lions aren't as catty as she thought they were. In fact, they kind of take her under their wing. Unfortunately, Rosalie isn't too thrilled by this development, and challenges Kayla on her feminist ideals and, ultimately, their friendship. Can Kayla balance feminism and fun; can she be friends with Rosalie and still be a Lady Lion? Or has Rosalie taken her crusade too far? The Kayla Chronicles is a funny, sassy look at the lighter and darker sides of idealism, balancing some truly serious themes with humor and a diverse, lively cast of characters.

You sold me! I just requested this from the library.

I love that you link to IndieBound, btw!

This was a fun one!

You can thank Tanita for setting up the IndieBound links--which we've been using ever since they were Booksense, just 'cause!