"He is not, as children’s book writers are often supposed, an everyman’s grandpapa."

It's kind of a joke, the idea of suffering for one's art. We've gotten away from the starving artist in the garret, looking emaciated, and, for some reason, French, with beautifully miserable eyes, like those horrifying poodle portraits painted on velvet that your grandma used to have. 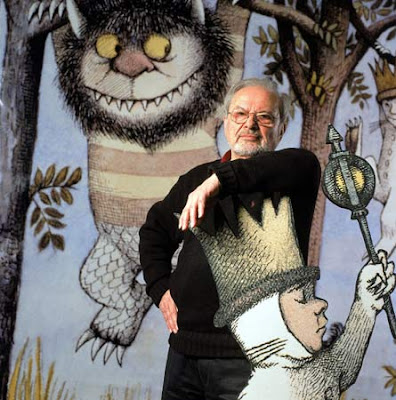 But... artists -- writers -- do suffer.
In the last three weeks, I've been doing a lot of queasy hanging over the virtual toilet of my mind, and retching. I've torn apart a hundred and sixty-one pages of a manuscript -- unfinished, mind you -- six times, and now I've rewritten forty pages of it to my satisfaction. (Not really. "Satisfaction" means I know I have to move forward at some point, so am sitting on my hands to leave that bit of it alone.) I've received a letter from a former student, asking me to mentor her, that is sitting unanswered in my inbox. I've realized I'm supposed to be a contributing member of the Poetry Princesses, and find it a stretch some weeks just to participate in Poetry Friday. My writing, at this point, sucks.

So, reading what Maurice Sendak said about his made me want to cry.

Never mind that Mr. Sendak’s originality and emotional honesty have changed the shape of children’s literature; that his work is featured in museums; that he has designed costumes and sets for operas, ballets and theater; that he has won a chest full of awards and prizes including a National Medal of the Arts. As the playwright Tony Kushner, one of his collaborators, said, “He’s one of the most important, if not the most important, writers and artists ever to work in children’s literature. In fact, he’s a significant writer and artist in literature. Period.”

Mr. Sendak protested, “But Tony is my friend.”

All of the publishing contracts, all of the awards, all of the applause, and Mr. Sendak can't really feel it. Like rubber bullets, the wonder has not penetrated. It makes sense to me to not be able to feel a constant awe about my writing -- I know the truth about my work. But Maurice Sendak expanded what subjects were permissible to be broached with picture books. He truly pioneered the concept of ...honesty.

Do we ever get to the place where we feel like what we do has relevance; that we are not just sort of making faces to entertain anonymous masses? Especially today, when we are reminded that there is so much in the world that is colder and darker and sharper-edged, does writing fiction, and making art ever feel like... enough?

Thanks to Liz in Ink for the NY Times link.
Posted by tanita✿davis at 1:42 AM
Labels: Literary Life Observations, Views

Your writing experience may suck at this moment, but you do not.

Art may be how the world heals. Healing can be painful. And crooked. And frustrating.

But I can't tell you how many times my whole self has been saved by one moment of beauty. One string of words. One image. One thing created by another human being that says: you are not alone. I stand with you.

"But Tony is my friend." Exactly, Mr. Sendak.

Just...wow. And all I can think is, if only I could just get to the place where I'm deemed worthy to entertain the anonymous masses; then, when people are actually reading it (or not), I suppose I'll truly worry if my work has relevance.

Strange to think that these fears don't go away upon publication or upon career success; they just mutate into new and exciting forms. Evidently a career in the arts is where the wild things are...

Perhaps it's a good thing if we don't ever get past feeling that we're just making faces to entertain. It's what makes us continue to strife.

Oops. It makes us continue to strive. My use of strife may indicate some deep rooted, simmering problem.

Well, Gail, we also have to continue to, er, strife. We wrestle and wrangle with life. Really. Strife works perfectly...