The Grey Areas of History 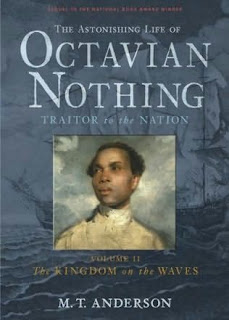 This review has also been cross-posted at Guys Lit Wire.

"Rebel or Redcoat, there were none who needed to use us sufficiently to save us."

In the Author's Note to M.T. Anderson's Astonishing Life of Octavian Nothing, Volume II: The Kingdom on the Waves, it states that "our Revolutionary forefathers espoused a vexed and even contradictory view of liberty." This second volume in the biography of Octavian--an imaginary character--takes place during a very real historical time period, one which the author has meticulously researched and depicted in all its contradictory glory...and ignominy.

Volume II brings to vivid life the idea that the patriots who fought against the British during the Revolutionary War were not necessarily the united front of politically idealistic, intelligent, salt-of-the-earth, clever, just, and resourceful Paul Revere clones that we tend to envision. In fact, the story of our country's early origins was—of course—complex and multifaceted, its residents a diverse but also strangely skewed cross-section of early settlers from across the Atlantic. And, of course, many of those residents did not consider "liberty" to include people of African descent; though they may have espoused liberty for all men, the definition of "men" might vary depending on whom you asked.

This volatile sociopolitical situation is, in many ways, embodied in the story of Octavian Gitney. At the beginning of this second volume, he is once again fleeing the College of Lucidity, this time carrying his former teacher—and current co-conspirator--Dr. Trefusis upon his shoulders. The two soon learn of a proclamation by Lord Dunmore offering freedom to any slaves who defected to join the British forces.

Octavian—certainly anything but a slave, in his own mind—decides to join the Royal Ethiopian Regiment, but in the strange times of the Revolution, nothing is quite as it seems, and war is not necessarily the righteous, clear-cut battle of oppressed against oppressor. For a young man coming of age, the imposing principles of slavery and racism, liberty and self-government, sometimes take a back seat to issues of friendship and trust, love and family and identity. For Octavian, the lofty and the worldly are all hopelessly intertwined.

Octavian Nothing: Volume II is an epic, provocative and eye-opening look at what history might have been like—indeed, probably was like—during the Revolution. As in Volume I: The Pox Party, Anderson's use of language is amazing, creating a character who is both incredibly intellectual but also an authentic product of his time. (And, if you're like me, and you shamelessly delight in appropriately used but seldom-seen vocabulary words, this is a smorgasbord of delectable morsels.) Fans of the first book won't be disappointed by this conclusion of Octavian's saga. Look for it in October 2008.

Quotes and comments herein are based on an uncorrected proof.
Posted by Sarah Stevenson at 5:00 AM
Labels: Adventure, AF, Historical Fiction, Magical Realism, Multicultural Fiction, Reviews

I've been rereading Volume 1 and getting practically giddy thinking about Volume 2 - can't wait to get my hands on it!