I've been looking forward to this for ages. Since last year, actually, when I just didn't have the travel funding to go to the first annual Kidlit conference. (We were saving up for a trip to the Venice Biennale last fall.) So I was really eager to meet fellow bloggers and represent for FW and RR at Kidlit 08: Bridging Books and Blogs.

On Friday evening, I arrived in Portland, and had the opportunity to try to transport myself to Deschutes Brewery downtown to meet up with kidlitosphere folks, but I was tired, and also feeling shy, so I didn't make it out of the hotel. Instead, I treated myself to a late dinner in the hotel restaurant and went back to my room to relax. I figured an early night was not a bad idea, since the day of conference fun was going to kick off around 8:00 a.m. (I am not a morning person. Not a bit.) 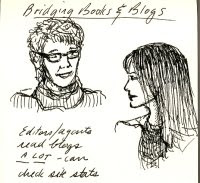 Shortly after 8:00, our lovely hostesses Laini Taylor and Jone MacCulloch welcomed everyone to Portland, and the day kicked into high gear. The first session was "Bridging Books and Blogs: A panel discussion about the Kidlitosphere," with Mark Blevis, Betsy Bird, Alice Pope, Dia Calhoun (our fellow Mills alum), and Lorie Ann Grover. I did take actual written notes, but as I have a tendency to do, I also doodled little pictures of the people who were presenting. Pictured at right: Lorie Ann Grover and Alice Pope. Pictured below: Mark Blevis.

I feel compelled to offer the following: Please do not be offended if I didn't doodle your picture. It probably means one of three things: a) I did not have a good view of your face from where I was sitting; b) you were moving around (which is not a criticism); or c) I was so rapt by what you were saying that I was too distracted/busy writing stuff down to draw you. Or, d) I did draw your picture, but I didn't like how it turned out so I don't want to show it to the public. :)

Anyway, one of the ideas that stuck with me from the opening session was the example of the Readergirlz, whose online and offline success seemed attributable in part to having a well-defined mission--a driving interest and a unique purpose. I don't know if FW has that--or needs it, since we're basically just two writers and readers talking about stuff we like--but it's something to ponder. Do we need a mission? Is FW really a project, or is it more of a pastime?

In any case, it was so exciting to get to meet such a great group of writers and bloggers in person--I can't emphasize that enough. Then, at 9:10, Colleen Mondor and Jackie Parker (over there on the right) spoke on "Making the Most of the Community: Blog Tour Events." I was especially looking forward to meeting Colleen, since we've communicated so often due to the SBBT/WBBT and working together on Guys Lit Wire; and I'd already met Jackie over the summer during a trip to Seattle, along with Alkelda the Gleeful, so I was super happy to see them both again.

It's funny, but when I met you all in person it was like we already knew each other, even though we kinda sorta didn't. I imagine that's what it's like when you think you knew someone in a past life (if you believe in that sort of thing, which I tend not to, but it's fun to think about). More on past life friends tomorrow, in Part II...
Posted by Sarah Stevenson at 7:37 PM
Labels: AF, Happenings, Views, World o' Blogs

Hi Sarah! It was great to meet you! Thank you for my drawing. I love it! And I am so jealous you went to the Venice Biennale last year. That had to be fabulous!

I'm so glad you posted the pictures - they are so so excellent. I loved watching you sketch; it was fascinating.

Meeting you was the thing I was most looking forward to (well, that and spending all that fun with Jackie!). I felt completely like we had known each other for years....we weren't meeting for the first time, but finally together as we should have been along.

Thanks for drawing me so beautifully, Sarah! I enjoyed having breakfast with you. :~)And thanks for the props for rgz!

Oh, these are cool! If you'd colored them, I'd know Laini right off. Such awesome hair!

Sarah: It was good hang out again after meeting this summer. I was tickled that you and Adrienne hadn't known each other, because it seemed that you two clicked right away, too. TadMack, just so you know, Adrienne won the signed copy of your book at the raffle. Thanks again for sending a signed copy of A La Carte along.

Oh, I'm SO SO happy you posted those sketches! I completely love the one you did of me! Thank you so much! I'm stealing it, by the way. *grin* my mom's going to love it.