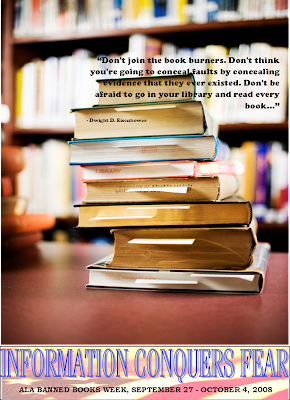 ALA's Banned Books week continues, and today's challenged book is Ken Mochizuki's Baseball Saved Us which was challenged in 2006. Questions about the book's appropriateness for second grade reading lists rose in New Milford, Connecticut school districts because the book uses the word "Jap" as a taunt.

Baseball Saved Us is about Japanese families living in internment camps during World War II, and how playing baseball gave shape to their lives and reminded them that they were still a part of America, despite the fact that they were being treated as enemy combatants and strangers in their own country. I was really surprised that this book was challenged; I actually bought this for my little brother years and years ago, so I've read it. I know that the word "Jap" was used, but it was used in a way that made it obvious to even the youngest reader or listener that it was said hurtfully, and it wasn't right. Being called names were the least of the troubles in which Japanese Americans found themselves during that part of history, and even second graders can be counted on to know what bad names are, and how they're hurtful.

Everyone wants to protect little kids -- and protecting them from having to live in a world again where things like internment camps happen means allowing them to be informed about injustice in a way they can understand.

Celebrate your right to read -- and to learn! Happy Banned Books Week!
Posted by tanita✿davis at 4:14 AM
Labels: Happenings, Reviews