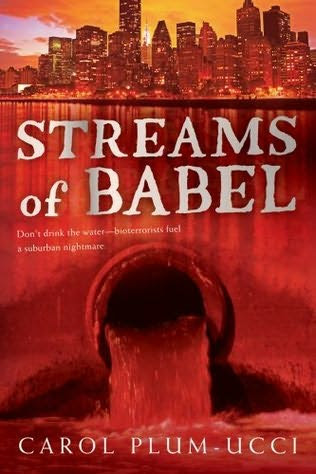 Cora Holman is embarrassed by her mother's death. How humiliating is it to live in the crappiest house on the street, and have a junkie for a mom? And then, when she overdoses on her pain meds, and dies in a gushing nosebleed, it's all Cora can do to hold it together while the EMT's take her body away. What's worse is that one of the EMT's is... her neighbor, Scott Eberman, whose younger brother Owen is in her class. He knows all about Mom's drug dependency, and he also remembers her, from when he was a senior, and she had a paralyzing, wordless crush on him.

That would be bad enough, except that Scott's really kind to her. He feels responsible, and doesn't want to leave Cora in the house alone. He decides to come back and check on her, after he checks on his Mom, who's been having awful headaches, and won't make time to go to the doctor. Poor Cora, really. No one should be alone in the house where their mother died, bleeding...

Owen Eberman is coming down with something, and his childhood friend, Rain Steckerman, is also not feeling well. Her father worked for the FBI and has recently been promoted to the United States Intelligence Coalition. Mr. Steckerman is observant -- and strict. If Rain's not up to her swim competition, he'll make sure she doesn't compete, and since the school's counting on her to win, Rain has got to compete. In an effort to avoid her father's eagle eyes, and in hopes of talking Scott into medicating her, Rain bunks down with Owen and Mrs. Eberman in front of the TV, and tries to drink enough water to head off her symptoms.

And then Mrs. Eberman takes a turn for the worse... and dies, with a gushing nosebleed.

One street. Two deaths. Twenty-four hours. What on earth is going on?

This harrowing, fast-paced novel is told from multiple points of view. The voices of faceless adults with their own agendas, a sullen New Jersey computer hacker with a head full of secrets, and an anxious Pakistani virtual spy are skillfully mingled with the voices of the frightened, grieving, panicking teens. Human emotion is tied to science, technology, and faceless bureaucracy. Government agencies are scrambling for answers, but they need more help than they realize. Is it a virus? Is it an act of terrorism? Will anybody figure it out in time?

Buy this book from an independent bookstore near you!
Posted by tanita✿davis at 7:21 AM
Labels: Reviews

Sounds good! I've enjoyed a few of her other books--great suspense.