Because a Semi-Colon is Not a Surgical Procedure

Once again, it's that special day which encourages professional sign makers, business persons and elementary students to really try and learn how to use an apostrophe properly. It's National Punctuation Day! 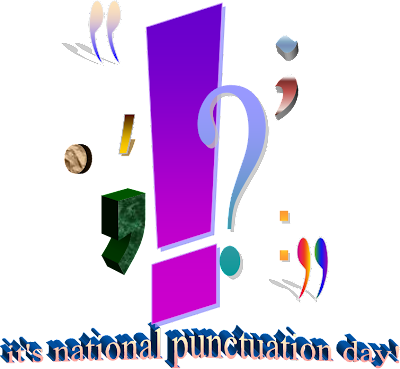 I just listened to the Punctuation Rap, (or you can listen to the funky blues version, if you want to actually understand the words -- the kids who do the rap are cracking up and not quite as clear) and thus am full of love for the world of properly punctuating people in the blogosphere.

The rap is a part of program called Punctuation Playtime for first through sixth graders put together by the guy who put Punctuation Day on the calendar four years ago, Jeff Rubin. I expect he's running around East Bay schools as Punctuation Man today. This whole thing makes me chuckle because it's making me think of "Conjunction Junction." And if you don't know what I'm talking about, pretend you didn't hear it...

Yesterday I read a piece in the Guardian about L.M. Montgomery -- probably most of you have heard by now that the family of the Anne of Green Gables novelist have chosen to reveal that she died by a deliberate overdose at the age of sixty-seven. I have to admit that I was sort of stunned into silence by that -- mainly because I'm not sure if it matters now. But I like the reasons given by the family:

Kate Macdonald Butler, daughter of Montgomery's youngest son Stuart Macdonald, made the long-kept family secret public in an article for Canada's Globe and Mail. "I have come to feel very strongly that the stigma surrounding mental illness will be forever upon us as a society until we sweep away the misconception that depression happens to other people, not us – and most certainly not to our heroes and icons," she wrote.

Perhaps the legacy of what Anne gave to the rest of us gave her the courage to do that. If only Kate's grandmother could have known.

I am so jealous that it's not even funny. Everybody going to the Portland Kidlitosphere Conference, have fun! And don't forget to write..!
Posted by tanita✿davis at 12:50 AM
Labels: Happenings, Random Notes and Errata, Views

It's this kind of hard-hitting news that led me to recognize you for an I *Heart* Your Blog Award. Well deserved too. Come by and see.

Well, I'm not going to Portland either. Blast. Between this dratted Hurricane Ike and family commitments, it was just not in the cards this year.

We will have to read all about it.

Oh, good Camille. You and I will sit and home and... not sulk. We'll redecorate. And stage elaborate plays. Or something.