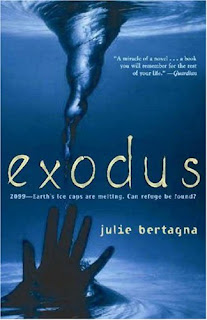 It's late in the 21st century, and life as we know it has all but disappeared under a rapidly rising ocean. Only scattered civilizations remain on the highlands of the earth, scraping by as what little is left of their farms and villages either drown underwater during the storm season or get moved to higher and higher ground.

On the island of Wing, life is getting more and more dire, but even so, fifteen-year-old Mara holds out some hope. On an ancient computer relic of the drowned world civilization, she's found vestiges of the old network, and tantalizing hints that new cities were built high above the floodwaters of the earth to save humanity from the encroaching oceans.

If she could only convince the other townspeople that they need to leave—that their island will drown with them on it, if they stay—then they could prepare their boats to seek out the closest of these sky cities. But it turns out that convincing people to leave is the least of her problems. Arriving at the city of New Mungo, they find a soaring complex of towers and tunnels—and a huge wall keeping out a floating city of boat people, refugees like the islanders of Wing.

Mara knows the only hope for saving her people is somewhere inside those walls, and she feels responsible, as the one who helped convince everyone to leave. As they cling to survival on their boats, she embarks on a dangerous quest to bring aid to them and the other boat people. Exodus by Julie Bertagna has a fascinating premise, and is a good quick read for fans of dystopian novels. The third-person present tense narration struck me as a little odd, but the cautionary message of this book comes through loud and clear.

Buy this book from an independent bookstore near you!

I love it -- we're both reading so much dystopia. Some of it is really, really good... sounds like this one's a winner, and I love the cover!

I liked it - it was very imaginative and had a lot of fantasy aspects to it as well. Kind of a fable, I guess.