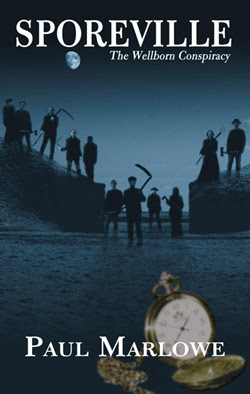 Things are SO not making sense.

Nothing's really been all that great since Elliot's mother was lost at sea, but at least he and his father were ...home. But now his father, the great Dr. Graven, has moved them. He's left a perfectly good practice -- allegedly to help Elliot's allergies -- for a stupid little backwards, backwoods, seaside town. Granted, the disgustingly muddy road and stormy night they come into town didn't help out his mood, but when Elliot practically drowns in the slime and mud trying to find help to unstick their carriage, he's a little unnerved.

Next, there's this ...guy he meets, on the road. He's practically sleepwalking -- no expression, no realization that he's just walked past close enough for Elliot to touch. His slack mouth gives Elliot the willies, for sure. And then, there are the DeLoup's... but at least they have hot water and are keen to help him get clean, even if Mr. DeLoup goes on and on and on and on and ON about military history, and weird little Alice screamed the first time she saw him.

There's all freaks, which is pretty much par for the course with this whole run down, muddy, sticky town. Sporeville. "What kind of name is that?" Elliot wonders. And why is everything so ...lifeless...dull... and filthy?

The Reverend falls asleep mid-word. Elliot finds it strange that everyone is so tired all the time. The whole town is sleepwalking -- and exhausted -- except for an oddly charismatic Southerner named Dr. Strange, and ...the DeLoup's. Even Elliot's father is sleepy... and soon, he's sleepwalking for real.

Elliot's got to do something.
He can't afford to lose his dad, too.
But finding out what's wrong... is more dangerous than he knows.

As much fun as spending Sunday afternoon watching The Wild, Wild, West reruns, this novel leaps into being with an over-the-top villain, a dark, Gothic looking town, strange noises, bad smells and sharp-faced, disapproving looking people, and a young man with a scientific mind. Fast paced, action-packed, and an insane blend of historical, science, fantasy, and Gothic fiction this is an excellent first book in the Wellborn Conspiracy series, and I sat down and inhaled this novel in a single sitting. You might be confused as to how there can possibly be a sequel, but the last chapter will give you an "Ohhh!" feeling and you'll be glad to know that there are more forthcoming.

This book is classified as "Steampunk," and if you're not sure what that is, read the definition later -- it's the BOOK you need to read. Go. Run, don't walk.

Yeah! This sounds FUN!! I especially like the pitchfork-waving villagers on the cover.

It really was awesome. Let me know if you want me to send you my copy.