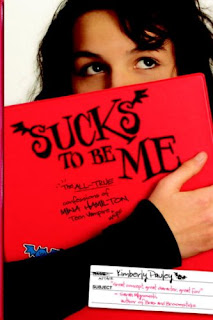 Mina's always known her parents were vampires. But they aren't the evil, scary, blood-draining type of vampires. In fact, they're actually pretty normal, even if they don't need to eat and they have to wear masses of sunblock when they go out in the sun. It's just that, shortly before Mina was born, her Uncle Mortie got turned into a vampire, and not long afterwards he dragged her parents into it.

Still, life is more or less normal, until Mina finds out that her parents have been breaking vampire law—Mina isn't supposed to know about them. They broker a compromise with the regional Vampire Council: Mina has a limited time to decide whether or not to become a vampire herself. In the meantime, she has to take vampire orientation classes with a cast of characters ranging from the Goth-iest of Goths to the ditsiest of cheerleaders.

In between is George, who actually seems pretty normal. The problem is, Mina can't reveal any of her new extracurricular activities to her best friend, Serena—who looks like a Goth but is really just a free spirit who kept the Goth look due to inertia. Without Serena, it's all really hard to cope with: the rules, the potential life (or death) changes, and the complications.

Add in a crush on a school hottie named Nathan, another crush on a super-cute wanna-be vampire boy, and a homicidally jealous Goth chick, and you've got Kimberly Pauley's funny, sardonic, and charming Sucks to Be Me. If you enjoyed the graphic novel Life Sucks, or if you're looking for an anti-Twilight, you might enjoy this look at vampire life through a humorous lens. I did, and I'm not the biggest fan of vampire books. Look for this one to come out later this month from Mirrorstone.

Buy this book from an independent bookstore near you!

THIS looks made of awesome.

Man. I need to catch up on my American reading!!!

Hey! Glad you liked it :-) I had a lot of fun writing it. Most vampire books just take themselves so seriously...

It really does sound like it was a fun book to write. Thanks for stopping by the blog! :)