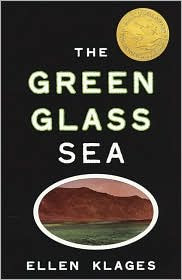 Eleven-year-old Dewey Kerrigan doesn't have a normal life by any stretch of the imagination. For one thing, her full name is Duodecima, and for another, unlike most other girls in 1943, she has a passion for science and engineering. She also doesn't have a mother. When her grandmother goes into a nursing home, Dewey takes the train alone from St. Louis all the way to Los Alamos, New Mexico, where her father is working on a top-secret war project.

"The gadget" is supposed to change everything, and it's exciting to be part of life on the base where all the latest research is taking place and there are actual female scientists, not just men. Dewey spends her free time working on gadgets of her own, cobbled together from junkyard castoffs and extra bits and pieces. It's just too bad that Dewey's father has to go away again, sent to Washington to help translate some documents.

Still, Dewey is excited at the chance to live with Terry Gordon, one of the women scientists working on the gadget, even if her daughter, Suze, doesn't seem to want her around. Suze Gordon and Dewey live in a community that's removed from the rest of the country, and on top of that, each one feels like an outsider in her own way, not really wanting or needing each other's company.

Suze is trying to get by as best she can, despite missing her old life in California. But despite her best efforts, she can't seem to quite become part of the group of girls at school—she's a little too free-spirited, a little too mischievous and adventurous. The last thing she needs is for "Screwy Dewey" to actually come live with her…but maybe, in another way, it's exactly what Suze needs.

With its two engaging and very real main characters, The Green Glass Sea by Ellen Klages brings the World War II time period and the atmosphere of the Manhattan Project to life, from a point of view you don't often get to hear--that of the families who were directly affected by the research, who lived in its midst but knew next to nothing about it. It's a viewpoint that poignantly brings home the idealism and hope placed in the development of new technologies and weapons at the time; an evocative backdrop for the core story of friendship and family and being an outsider.

Buy this book from an independent bookstore near you!
Posted by Sarah Stevenson at 6:24 PM
Labels: AF, Historical Fiction, Middle Grade, Reviews

Love, love, LOVE this book, and the sequel. I liked the first cover better, though.